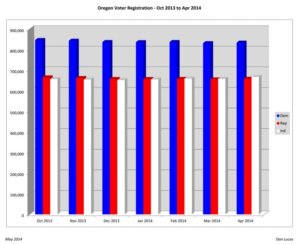 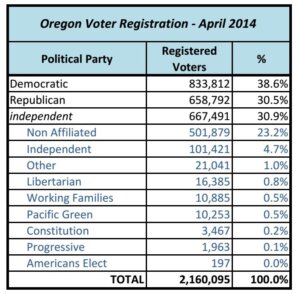 This trend in Oregon parallels a national trend. Jeff Mapes of The Oregonian reported back in January that “Nationally, Gallup last month found that 42 percent of voters identified themselves as independents, the highest percentage the pollster has found since it started asking the question 25 years ago.”

The move away from registering with major parties has been growing over the last several decades. Writing back in January on how the number of small-i independents in Oregon had hit 30%, Mapes noted that back in 1960 98% of Oregon voters were registered as either Democrats or Republicans. Today, a little over 50 years later, that number of Oregon voters registered as either Democrats or Republicans has dropped to 69.1%.