Tonight’s voting tallies will determine the winners of races across Oregon. Six of those are races for the Oregon House where the candidates have raised close to a million dollars or more combined in each race – in house districts 20, 54, 30, 51, 29 and 40.

In the session prior to that, in 2009-2010, Democrats held a super-majority in both the Oregon Senate and the Oregon House, and so had the 3/5 majority needed to increase revenue in the Oregon Legislature without any Republican votes. That’s when Democrats passed the huge tax increases that became Measures 66 & 67.

By holding on to 26 seats in 2012, Republicans denied Democrats the 36 seats they would have needed to reach super-majority again.

Two of the six million-dollar House races are Republicans playing defense – trying to hold on to house districts 20 (Salem) and 54 (Bend). Both HD20 and HD54 are open seats, due to the retirement of Rep. Vicki Berger (R) in HD20 and the congressional campaign of Rep. Jason Conger (R) from HD54. Democrats want to pick up two house seats to return them to the super-majority.

Four of the six million-dollar House races are Democrats playing defense – trying to hold on to three of the four seats they won back in 2012 (HD30-Hillsboro, HD51-Clackamas, HD29-Hillsboro) and to former House Speaker Dave Hunt’s (D) HD40 seat in Clackamas County. Tonight’s contest in HD40 between Rep. Brent Barton (D) and Steve Newgard (R) is a rematch of the closest 2012 race, where Barton only won by 1.2%. 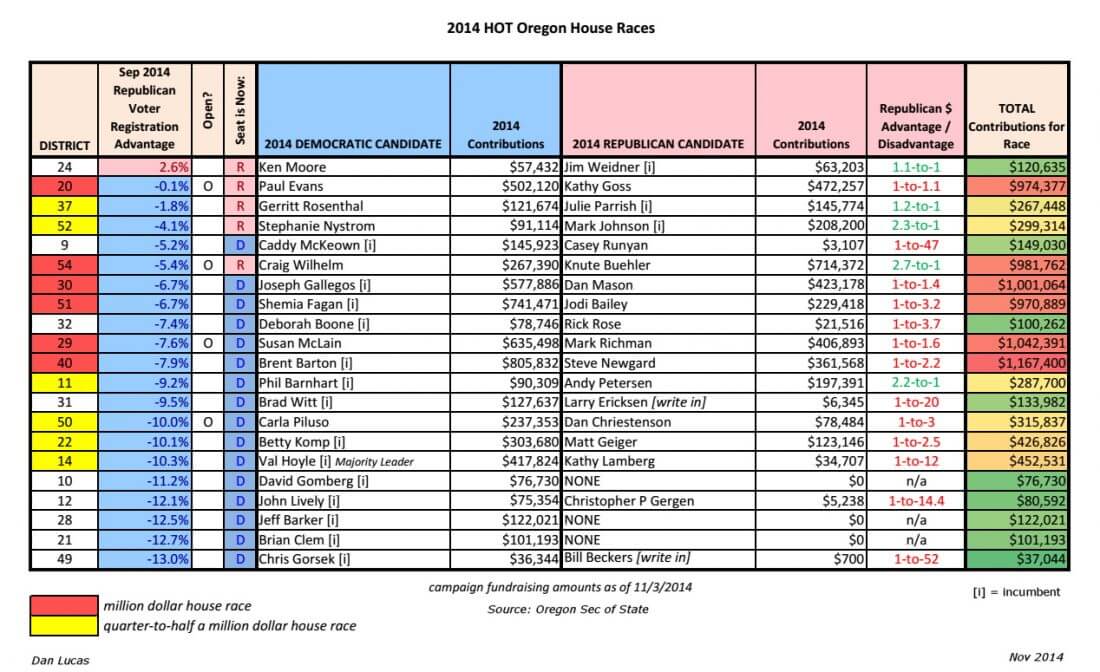