The Portland Tribune ran an article a couple of days ago on the upcoming Oregon legislative session. It focused on Sen. Mark Hass (D-Beaverton) starting his role as chairman of the Senate Finance and Revenue Committee. The article talked about “Oregon’s economic ups and downs and how they affect the income taxes that schools and state services rely on,” and that Hass is “determined to do what he can to help reduce the peaks and troughs of the state budget cycle.”

Here are five quick thoughts on that ongoing, misleading narrative. Increasing revenue, primarily through taxes, is not the answer. Further, “stabilizing” revenue – through something like a sales tax – to help smooth out the “economic ups and downs” – is also not the answer.

1. The state spends nearly all the money it gets. In the last legislative session, the state’s General & Lottery Funds’ 2-year budget increased by a staggering $2 billion. It went from $14.7 billion to $16.7 billion. Then Kitzhaber pushed through $200 million MORE in unnecessary tax increases as part of his “Grand Bargain”. Now, in the Governor’s proposed budget for the next two years, revenue is expected to increase an additional $1.8 billion, growing the General & Lottery Funds’ 2-year budget to $18.6 billion. As usual, very little is set aside for the “downs” and “troughs” in Oregon’s “economic ups and downs” or “peaks and troughs.” Newspaper editorial boards like The Oregonian and Medford Mail Tribune are sensibly urging Kitzhaber and the Oregon Legislature to finally put more of the increases into rainy day funds.

2. The state’s spending priority is NOT schools. Despite all the rhetoric, K-12 funding is not currently a priority in the state budget. I wrote on an example of this back in 2012 when M66/M67 were sold to voters as being for school funding, “Even in the budget cycle that the M66/M67 tax increases passed, K-12 funding in the budget was cut $150 million while other agencies, most notably DHS, saw an increase. DHS alone increased $330 million in that budget cycle.” I also wrote this back in 2012: “The solution to stable K-12 funding is prioritizing. The K-12 budget needs to be made part of a ‘core fund’ that is funded first — at the previous level [including reasonable cost-of-living increases], along with prisons, state police and a limited set of key human services for the most vulnerable. Then, other agencies that depend on the General/Lottery funds would make their cases to the legislature for the remaining funds.”

3. Schools are used as budget hostages – and Dems have admitted that. As I wrote back in 2012, “At an Education Town Hall meeting in Beaverton in July 2010, the chair of the Oregon House Education Committee admitted that schools are used as budget hostages.” Then Education Committee Chair Rep. Sara Gelser (D-Corvallis) admitted that because everyone connects to K-12 schools, they are used to advocate for higher taxes – that don’t actually end up going to K-12 schools. (click here for links to a transcript and audio of the July 2010 Education in Oregon Town Hall)

4. State spending continues to go up & up. State spending in Oregon doubled in ten years, growing from $30 billion to $60 billion. The Oregon All Funds budget doubled from the budget ending in 2001 to the budget ending in 2011. The state’s General and Lottery Funds’ budget, a subset of the All Funds budget, went up by 35% during that same time. Over the last 40 years, state income tax collections have continued to significantly outstrip population growth and inflation.

5. A significant portion of school district’s budgets continues to be eaten up by past PERS excesses. One of the big reasons school districts in Oregon need so much money is because such a large portion of their budgets goes to paying for PERS. Back in 2012, I wrote “That would be the equivalent of a total of 84 teachers laid off next year just for the Hillsboro School District to pay for PERS increases.” The Hillsboro School district was going to have cut the equivalent of 84 teachers from their budget just to cope with PERS increases for one budget cycle! The 2013-2014 Salem-Keizer School District budget reported its total PERS rate was 27% of payroll – and that was factoring in part of the recent modest PERS reforms. By comparison, private sector retirement benefits run around 4 percent of payroll, according to the U.S. Department of Labor. Even if the modest PERS reforms hold up in court, there is more work to be done to make reasonable changes to PERS to address past excesses that are making it harder for our tax dollars to make it into the classroom. 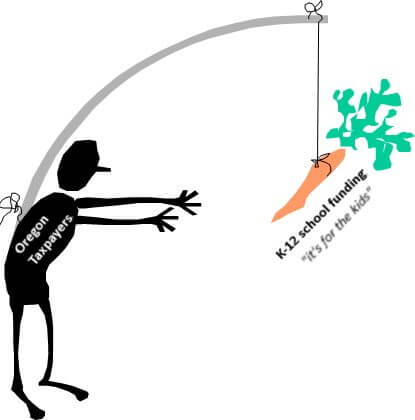