A year ago Oregon’s First Lady Cylvia Hayes was a speaker at the 2014 Global Presencing Forum in Cambridge, Massachusetts. The forum’s subtitle was “From Ego to Eco-System Economies: Creating Well-Being for All.”

Throughout the forum and all of its literature, videos and website, Hayes was billed as both Oregon First Lady and as CEO of 3EStrategies – indicative of her current conflict-of-interest predicament. Hayes is facing allegations that she has been using her role as a public official in the governor’s office to personally profit her private consulting business. Those allegations are being investigated by the Oregon Government Ethics Commission and the FBI. 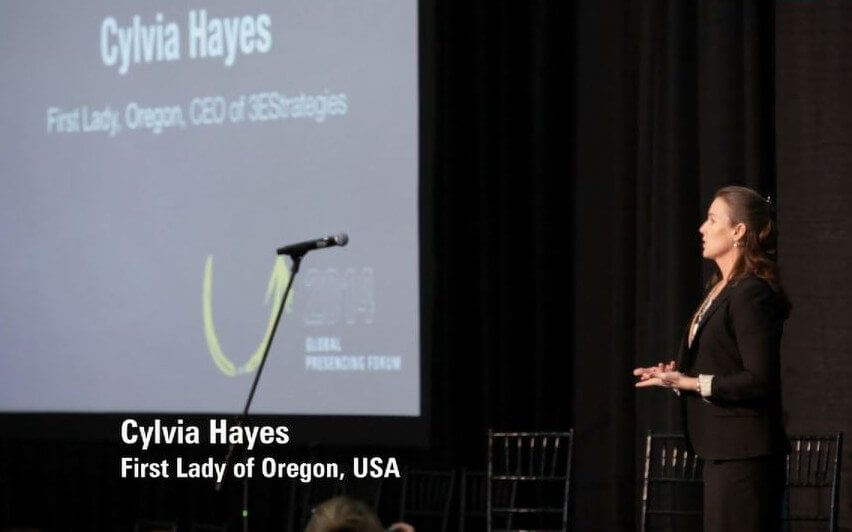 If you want to try to watch one of the videos or read any of the forum materials, you will likely need a translator. The forum is saturated with a deliberately contrived use of language – it is filled with doublespeak and Orwellian newspeak, beginning with the new word “presencing.” From the Presencing website:

Presencing is a blended word combining “sensing” (feeling the future possibility) and “presence” (the state of being in the present moment): presencing means “sensing and actualizing one’s highest future possibility—acting from the presence of what is wanting to emerge.”

Hayes was a speaker in a session on “Measuring What Matters: ‘Beyond GDP'” – that discussed redefining progress from traditional measures of progress like GDP to new measures like the “Genuine Progress Indicator (GPI) or from Bhutan’s Gross National Happiness (GNH) index.”

Hayes’ radical, self-serving views on the environment were very apparent. One small example: during her talk she said “I think one of our big opportunities in our movement is to figure out how to create conditions so that people can make their livelihoods, their livings, doing the work that we need to have done – taking care of our kids, our vulnerable citizens, restoring forests and wetlands, and sequestering carbon.”

Hayes is very much part of the movement against the productive use of natural resources – a movement that prefers to create make-work jobs that talk about, define and enforce artificial constructs. A movement that seems more interested in creating new government jobs and new forms of taxation than in actually protecting the environment.

UPDATE (2/4/2015): It looks like the Governor isn’t the only one cutting and running from Oregon First Lady Cylvia Hayes – the 2014 Global Presencing Forum has taken down the video of Cylvia Hayes presenting at their forum. Not to worry, you can still see it here.