On Tuesday the CEO of polling firm Gallup wrote an opinion piece called The Big Lie: 5.6% Unemployment. It’s about how the official unemployment rate is extremely misleading – because disappeared in that rate are all the people who’ve given up looking for a job or who are underemployed. The Gallup CEO wrote “as many as 30 million Americans are either out of work or severely underemployed.”

The same thing is happening here in Oregon. The Oregon Employment Department and local media have touted “that Oregon has regained all the jobs lost during the recession.”

A month and a half ago an economist with the Oregon Employment Department said “A lot of people have been waiting for this day where the total employment would rise above where we were before the recession.” In a press release titled “A Bright Economic Future for All Oregonians” Gov. Kitzhaber said “employment is at the highest level ever with 1,740,800 Oregonians at work.” Even the Portland Business Journal wrote “Oregon has regained all the jobs lost during the recession.”

That is all Oregon’s “big lie.” It is the misconception that the job situation in Oregon is now back to what it was before the 2007-2008 recession, or possibly even better.

To begin with, Oregon’s unemployment rate in 2007 was 5.2%. That was just before the recession.

It is now 6.7% – the 6th worst state unemployment rate in the nation.

How can that be? How can Gov. Kitzhaber be saying that “employment is at the highest level ever” and how can the Oregon Employment Department be saying “Oregon’s payroll employment rose above its pre‐recession peak,” when in fact the unemployment rate is WORSE now than it was before the recession?

Either they are dangerously ignorant of relevant and meaningful employment numbers or they are attempting to mislead Oregonians about the true job situation.

A number of different things are measured around employment. The most common one is the unemployment rate – which essentially measures how many people have jobs relative to how many people are looking for jobs.

Another measurement is the labor force participation rate – which essentially measures how many people are in the labor force (either have jobs or are looking for jobs) relative to the total adult population. This is an important number because it is a way to find more of the people who have been disappeared by the unemployment rate – all the people who’ve given up trying to find a job or all the people who had to retire sooner than they wanted. (It isn’t able to parse out the underemployed – people who had to take jobs that were either less than they were qualified for or who settled for fewer hours.)

A May 2014 Oregonian article with the headline Labor force participation in Oregon at lowest recorded point noted that “Just three in five Oregon adults are in the labor market, leaving the smallest share of workers and job seekers supporting the population since officials started keeping track in 1976.”

The state’s January 7, 2015 Economic Recovery Scorecard noted “Some [measures], such as the overall labor force participation rate, are down in large part due to demographics. (Plus some due to a weak economy…”

So in the worksheet below, (1) the Oregon Employment Department, governor and media are talking about the number of employed Oregonians, noting “that Oregon has regained all the jobs lost during the recession,” – referring to the 1.741 million jobs in the December 2014 report now exceeding the pre-recession level of 1.739 million jobs (Nonfarm Employment, seasonally adjusted). That’s a misleading and arguably meaningless number.  Because the number of unemployed has increased by 32,000 since 2007 and the number of adults in Oregon has increased by 234,000 since 2007, (2) our labor force participation rate has gone down.

In addition to the higher unemployment rate now – hidden in the numbers are all the Oregonians who gave up on finding work and are no longer counted as “unemployed” or as part of the labor force. The 1.2 million adults (3,116,710 minus 1,877,956) not in the 2014 Oregon labor force are made up of discouraged workers, students, homemakers and retired people – and retired people include those who chose to retire and those who retired early because they gave up on finding work.

The state produced a graph comparing Oregon’s declining Labor Force Participation Rate to the national average back in July 2014: 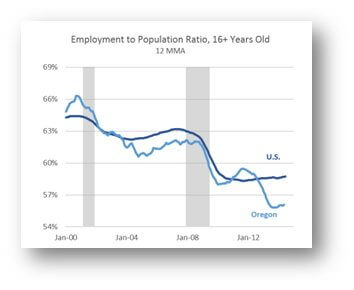 A July 2014 White House report estimates the causes of the drop in the labor force participation rate are:

33% – Other factors (including the severity of the Great Recession)

Oregon’s job situation is worse now than it was before the recession. After seven years, the recovery still has not come to Oregon.

Our 6.7% unemployment rate is worse than the 5.2% rate in 2007, and even that 6.7% rate only tells a part of the story of Oregonians struggling with the economy.

NOTE: The numbers used in the Oregon Labor Force Participation Worksheet are from a variety of sources and don’t include all the numbers (i.e. inmates of institutions other than prisons/jails) used by the US Dept of Labor – Bureau of Labor Statistics. I wasn’t able to find where they “show their work.”