A few days ago we reported on Gov. Kate Brown’s chilling moves to silence & punish state employees who refused to delete Kitzhaber emails. KATU is reporting today on new findings about Kitzhaber’s dealings in those emails, based on investigation by Willamette Week’s Nigel Jaquiss:

“Emails that former Gov. John Kitzhaber tried to have deleted reveal that he turned decision-making for the troubled state health exchange, Cover Oregon, over to a campaign consultant.” [That consultant was Patricia McCaig – who was not a state employee]

“‘These emails show that a lot of the state’s business was being conducted in secret on private email accounts and far from the scrutiny of the Legislature, or the press, or the public,’ Jaquiss said.”

Is Kate Brown trying to cover her own incompetence or worse in her prior role as Sec of State in overseeing elections?

Troubling stuff today coming from Nigel Jaquiss at Willamette Week: “In private, however, Kitzhaber handed oversight of the Cover Oregon mess to a secretive campaign consultant who liked to call herself the Princess of Darkness.”

Jaquiss is also reporting “Records show dozens of emails between Kitzhaber and McCaig on Cover Oregon. During this time, McCaig wasn’t billing Kitzhaber’s campaign. That enabled Kitzhaber not to disclose her work on his campaign finance reports, as required by law,” and “In August 2014, WW reported that McCaig was effectively running Kitzhaber’s re-election campaign and that Kitzhaber was not reporting her contributions. On Sept. 12, Kitzhaber emailed McCaig from the Pendleton Round-Up. He joked about that lack of transparency.”

Now, let’s go back to last October to a column Jacob Daniels wrote for Oregon Catalyst about then Secretary of State Kate Brown’s handling of the McCaig campaign law violations: Oregon Sec of State: It’s OK if Democrats do it.

Brown’s response to Patricia McCaig “working off the books” wasn’t even a slap on the wrist for the “Princess of Darkness”: “No need to report McCaig’s in-kind political work.”

That apparently partisan call (not Brown’s first) – just before last November’s election – may now come back to bite Brown.

These new emails are going to cause Kate Brown some problems – no wonder she wanted to punish and silence the whistle blowers who wouldn’t let Kitzhaber delete them. 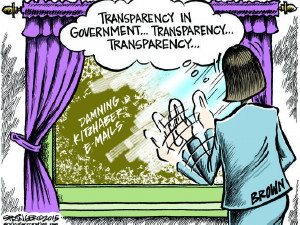