The bill, SB 941, will expand background checks required for most personal sales of firearms. The bill requires people selling a gun to go to a gun dealer and request a background check on the person they want to sell the gun to. As part of that background check, the person wanting to buy the gun will fill out ATF Form 4473.

Question 11.e in Section A asks “Are you an unlawful user of, or addicted to, marijuana or any depressant, stimulant, narcotic drug, or any other controlled substance?”

If the person wanting to buy the gun is a marijuana user and answers “Yes”, they will be prohibited from buying the gun.

From the ATF Form 4473: “I understand that a person who answers ‘yes’ to any of the questions 11.b. through 11.k. is prohibited from purchasing or receiving a firearm.”

If the person wanting to buy the gun is a marijuana user and answers “No”, they will be committing a Federal felony.

From the ATF Form 4473: “I also understand that making any false oral or written statement, or exhibiting any false or misrepresented identification with respect to this transaction, is a crime punishable as a felony under Federal law, and may also violate State and/or local law.”

In 2011 in Colorado the federal Bureau of Alcohol, Tobacco, Firearms and Explosives (ATF) sent out a letter saying it is illegal for medical-marijuana patients to own firearms. An article in the Denver Post reported “Everybody who buys a gun must fill out ATF Form 4473, which asks: ‘Are you an unlawful user of, or addicted to, marijuana or any depressant, stimulant, narcotic drug, or any other controlled substance?’ Answer yes, and you don’t get the gun. Falsely answer no, and you’ve just committed a crime. The ATF’s letter, sent out Sept. 21, [2011] clarifies that the bureau includes medical-marijuana patients in that group of prohibited buyers because their marijuana use is inherently illegal federally.”

According to Federal law, then, it was already illegal for Oregon marijuana users to own firearms. SB 941 just closes a loophole that still allows them to purchase firearms from private individuals.

Sen. Burdick and Sen. Prozanski both sit on the Joint Committee On Implementing Measure 91 (the measure to legalize recreational use of marijuana in Oregon), Sen. Burdick as Co-Chair. 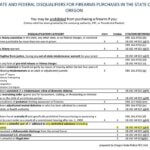 UPDATE (4/23/2015) from the Bend Bulletin: Pot use would prohibit gun buying in Oregon