“a single Cannabis cigarette [grown indoors] represents about 10 pounds of CO2 emissions, an amount equal to running a 100-watt light bulb for 75 hours”

In Oregon, “the 2007 Legislature created a renewable portfolio standard (RPS) that requires the largest utilities in Oregon to provide 25 percent of their retail sales of electricity from newer, clean, renewable sources of energy by 2025.” The RPS is intended “to promote the development of new renewable resources and decrease reliance on fossil fuels.”

In order to meet government environmental regulations intended to shift reliance to renewable resources, to decrease the use of fossil fuels and to overall reduce greenhouse gas emissions requires 1) shifting how electricity is produced as well as 2) reducing how much electricity is used. In Governor Kitzhaber’s December 2012 10-Year Energy Action Plan, one of the core strategies called out was “Meeting 100 percent of new electric load growth through energy efficiency and conservation.”

When Oregon passed Measure 91 (legalizing recreational marijuana) last year, it made attaining that goal of energy efficiency and conservation more difficult. The reason is that growing marijuana indoors requires a great deal of electricity.

Recent testimony at the “Marijuana Committee”

In the hearing, a spokeswoman from the P.U.C. testified that the NW Power and Conservation Council currently estimates an electricity load growth of 180-300 average megawatts by 2035 for indoor cannabis production. For perspective, she noted that 1 average megawatt is enough to power 1,000 homes. So just to meet the increased demand for indoor marijuana grows will require as much electricity as it would take to power 180,000 to 300,000 homes.

A spokesman from PGE noted that “85% of current transformer cutouts are caused by marijuana grows, legal and illegal,” and that “an indoor grow module accommodating 4 [marijuana] plants sucks as much electricity as 29 refrigerators.” 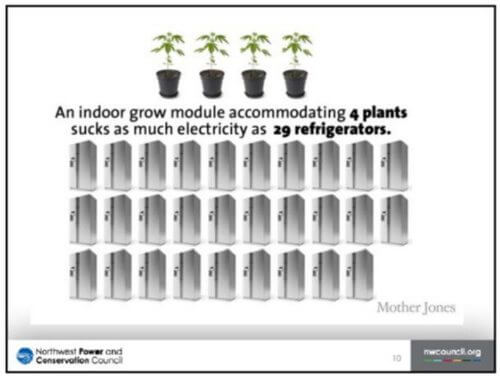 According to a study by sustainability researcher and consultant Evan Mills, “indoor cultivation of cannabis is driven by criminalization, pursuit of security, and the desire for greater process control and yields.” Growers were originally concerned with prosecution and seizure of their marijuana, but they also are concerned about theft of the very valuable cash crop.  There are also the “biases of pot consumers” who feel that “indoor is better marijuana than outdoor.”

The future challenge of power consumption for indoor marijuana grows

An article in USA Today from last November noted that “In the Pacific Northwest, utility experts say marijuana growers in 20 years will be demanding as much power as a small city.” That same article reported that in Boulder, CO “Marijuana growers around this famously pot-friendly city next year will start paying special fees to offset their contributions to climate change.”

Here in Oregon, the Ashland city administrator recently told the city council that “his research into Colorado and Arcata, Calif., shows energy usage jumped there after legalization.” Ashland is concerned that the extreme electricity consumption by indoor marijuana grows could “could cause the city to jump a [BPA] category, from Tier 1 to Tier 2, which would increase rates for all the power it buys.”

A 2011 study reported in the NY Times estimated that indoor pot-growing operations in the U.S. used enough electricity to power two million average homes – and that usage is expected to increase with legalization.

PC Magazine reported that “according to a 2012 report from sustainability researcher and consultant Evan Mills, Cannabis production (legally sanctioned and otherwise)… equaled the carbon output of 3 million cars.”

In the 2011-2012 report from Evan Mills titled Energy up in Smoke: The Carbon Footprint of Indoor Cannabis Production it notes “The analysis performed in this study finds that indoor Cannabis production results in energy expenditures of $6 billion each year–6-times that of the entire U.S. pharmaceutical industry–with electricity use equivalent to that of 2 million average U.S. homes. This corresponds to 1% of national electricity consumption or 2% of that in households. The yearly greenhouse-gas pollution (carbon dioxide, CO2) from the electricity plus associated transportation fuels equals that of 3 million cars” and “From the perspective of individual consumers, a single Cannabis cigarette represents about 10 pounds of CO2 emissions, an amount equal to running a 100-watt light bulb for 75 hours with average U.S. electricity.”

As Oregon moves forward towards legalizing marijuana, mitigating the impact on global warming is one more complexity that will need to be tackled.