Salem, OR – Monday, Senate Republicans released a “Reverse Christmas Tree” package of wasteful spending bills passed or by the Democrat-controlled legislature this session. The $203 million in expensive, unnecessary projects and policies should be sent immediately instead to the State School Fund, they argued.

“Democrat leaders have spent the past five months pushing expensive, partisan programs through the legislature that cost Oregonians real money,” said Senator Chuck Thomsen (R-Hood River). “Now they want to create a Task Force to figure out how to reduce class sizes? The answer is simple: more funding and more teachers. We don’t need a task force; we need to fully fund education now.”

Earlier this session, Senate Republicans advocated for an $8 billion K-12 education budget, allocating unexpected revenue from economic growth to Oregon schools. Instead, Democrats passed a $7.373 billion education budget, which will force school districts across the state to lay off teachers and cut school days.

“Democrats refused to fully fund K-12 education this session, despite an extra $1.8 billion in new revenue and multiple opportunities to pass a fully funded budget,” explained Senator Tim Knopp (R-Bend). “We’ve passed $203 million worth of new mandates and programs that don’t reflect Oregon values. Oregon citizens believe fully funding education is the legislature’s top priority, and we have an opportunity to live up to their expectations by allocating the funds in this Reverse Christmas Tree package straight to our classrooms.”

In May, Senate Republicans decried the theft of $61.3 million from the corporate kicker that Oregon voters intended to allocate to the education budget. Should Democrats follow the direction of voters and give the corporate kicker money back to schools, alongside funds from the Reverse Christmas Tree package, the legislature could allocate over $250 million more to K-12 education next biennium.

A motion to adopt the Reverse Christmas Tree amendment failed on a party-line vote in the Oregon Senate. 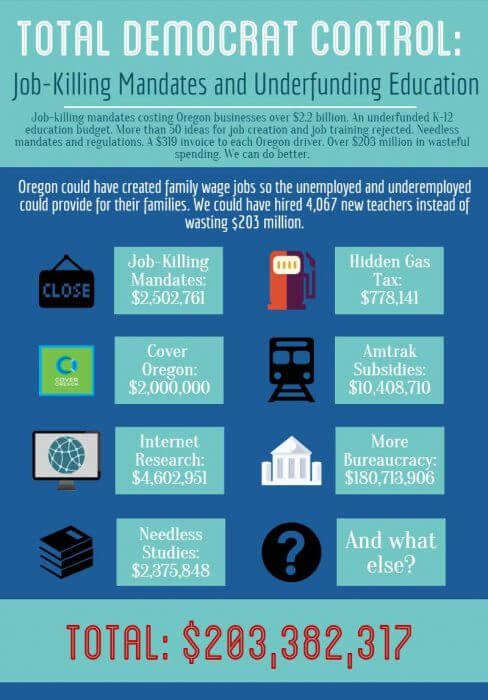