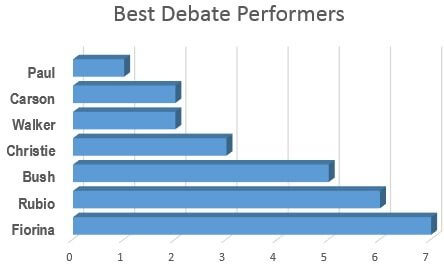 The Taxpayer Association of Oregon PAC decided to try something new and ask Oregon’s younger voters their opinion on the debate and vote for  the top three performers. (the highly interesting yet unscientific poll on right).

* Give us your opinion in the comments *

“My biggest takeaway is Trump is making the field stronger across the board. He is pulling them out of their comfort zone.”
TB from Portland

“Bush misses the point on the immigration problem. We have issues with illegal immigrants, not guest workers.”
Polly from Portland

“Overall, there are just far too many candidates for voters to make any sense of what’s happening. Voters are parents and their 11 Republican children all want their attention.CNN completely botched this debate. They attempted to frame a candidate as a bad guy and then force them to prove they weren’t which caused muddled questions and answers.”
Reagan from Bend

“Bush handled himself well against Trump’s attacks, proving by a long shot who would be better poised to have the key to the nuclear arsenal.”
Philip from Beaverton,

“The debate focuses on the wrong issues – the questions focus on soundbite-sexy topics, not on issues that voters should be focused on when voting for our nation’s leader. We need to be talking about the issues that are impacting every day Americans like jobs, employment, taxes, education, our future prospects to be successful and responsible individuals, building a strong nation and getting some stability back to being an American.”
Rebecca from lake Oswego

” I was disappointed that they did not cover education. As a student, I have concerns about the education system in the U.S. and would have liked to hear the candidates ideas on education reform.”
Philip from Beaverton,

“Kasich lost any ground he gained in the last debate.High definition didn’t do these guys any favors.”
William from Wilsonville

“Huckabee resorted to too much exaggeration. He appeared desperate.”
Phillip from Beaverton,

“In the Shadow of the Air Force One that bore Ronald Reagan across the globe, Republican candidates fought for the honor to follow in his footsteps with foolishness that is causing infinite laughter on social media websites and admirable rhetoric that will inspire the leaders of tomorrow.”
Andrew from Olympia

“Cruz always looks like he’s about to cry.  $10 bill question became sloppy kiss to moms and wives.  Walker seemed like a JV team”
Amy from Portland

“Carly surprised me with her controlled zeal & pitch-perfect one-liners. The most impressive moment of the debate was her sincere passion in excoriating Obama & Hillary for excusing the inhumanity shown in the “beating heart” Planned Parenthood videos and contrasting that with “the heart of this nation”
Nathan from Beaverton

“Rubio is the most like Ronald Reagan on that stage. He has incredible optimism, and is a great communicator but needs to prove he has a plan.”
Reagan from Bend

“Fiorina made excellent jabs against Trump. Even if she stands no chance, that alone is worth her running.”
Philip from Beaverton,

“I liked that Carson, Rubio, and Fiorina all seemed genuine. They may not have as much experience, but they truly believe in making the United States a better place.”
Taylor from Amity

“I did appreciate Christi just because he was positive throughout the whole debate and didn’t try to attack his fellow Republicans.”
Andrew from Olympia

“Rand Paul was smooth delivery for everything, except for speaking up and being heard”
J.T. from Beaverton