And some wonder why the public is fed up with career politicians who say one thing and do another. In the case of Oregon Gov. Kate Brown’s position on statewide tests—do one thing and say another?

All anyone needs to do is check out Beth Slovic’s recent article in Willamette Week.

Here’s the story in nutshell:

Brown signed a bill, pushed by the Oregon Education Association (OEA), that made it easier for Oregon students to opt-out of statewide tests. These tests were designed to determine if a student is college-ready. The teachers’ union thinks the state’s new standardized tests are “harmful” to kids. The union is also a longtime political funder of Kate Brown, and at least two of its top officials have taken jobs in Brown’s administration (one as a key education adviser).

So, Brown signed the OEA’s priority bill. What came next is just incredible. After signing a bill that made it easier for parents to opt their kids out of standardized tests and harder for local school officials to do their jobs (part of which is ensuring that students take the test so Oregon doesn’t lose federal school funds), Brown then urged parents not to let their kids skip the test.

In Slovic’s article, Hood River School Superintendent Dan Golden called the move “hypocritical.” He was just getting started: “[Brown] signed a bill she knew was bad for kids…,” Golden wrote in a Sept. 8 email to the state. “I am ashamed of our state leadership.”

He’s right, of course. Kate Brown seems to have taken a page out of the career politician’s handbook. She was for Oregon school children skipping tests before she was against it.

Last week, The Oregonian published excerpts from a journal that former Gov. John Kitzhaber kept during his first stint as governor.

“No courage and no leadership,” he wrote at one point. “Nobody is willing to put their political career on the line for principle.”

He was talking about Democrat and Republican legislators. Sadly, he singled out Kate Brown. 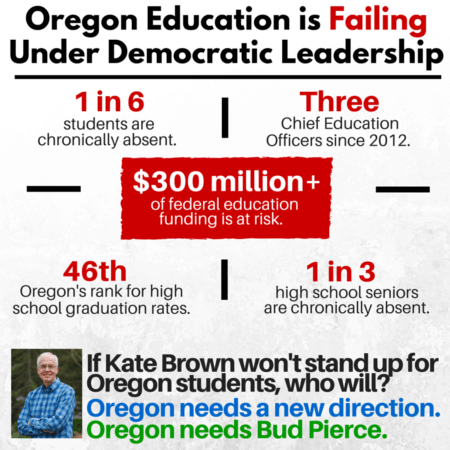