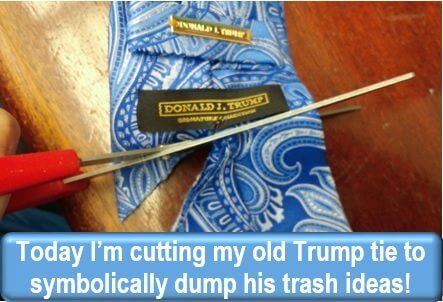 By Jason Williams
– Williams is a writer, speaker & founder of Taxpayer Association of Oregon

I’m cutting my Donald Trump tie today to do away with his garbage ideas.

The scandal-mouth parade of Trump is why our fiscal conservative vision of liberty & low taxes is being derailed.

Think about the conservative values you personally cherish (second amendment, tax cuts, cutting deficit, replacing Obamacare) and notice how they’ve been drowned out by Trump’s poisonous reality show. What is happening right now is what is going to continue to happen in the future as long as Trump keeps center stage. This spells doom for people who actually wish to restores rights, fix things and stop government overreach.

Trump’s idea of banning Muslim immigrants and building a religion database on Americans is dead wrong. It smacks of big brother and big government that quashes our personal privacy (which makes me appreciate Rand Paul’s message even more). It is Afghanistan and Iraqi Muslims who served as interpreters and informants alongside our soldiers at great risk to their own family who are trying to immigrate to America. It is the moderate Muslim scholars and bloggers around the world who come to America to escape death threats and to find a safe haven to keep broadcasting their reform message. Many of our greatest political allies have studied in America before becoming a leader of a Muslim nation (i.e. King Abdullah of Jordan).

It is a conservative and family value for men to stand up when a woman is humiliated in public over her weight or looks. This is what I teach my young nieces. It is conservatives who stood by veterans when they were mistreated by everyday Americans when they returned home from Vietnam, so why let Trump publicly dishonor a Vietnam veteran because he was captured while serving his country? It is conservatives who historically have been recognized for caring for the disabled and so it becomes offensive to watch conservatives cheer Trump as he ridicules a disabled man in public. It is no surprise that Trump is also the candidate to most often personally attack other conservative candidates  in such a juvenile unnecessary way.

I think it is wrong to have a double standard.  I think Trump’s continuous embarrassments will ultimately hurt our cause of lowering taxes and fixing runaway spending.