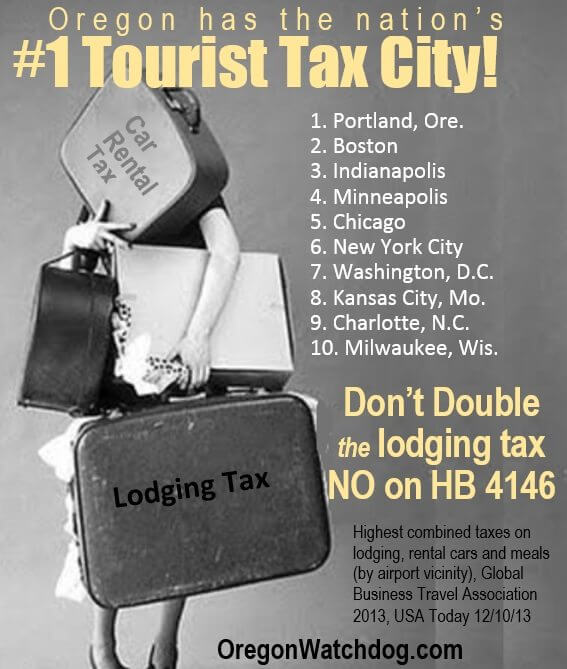 Oregon’s already has the nation’s top tourist tax city with Portland Oregon.  Now the Legislature is eyeing HB 4146 which would double the statewide lodging tax.  In addition to  doubling the statewide lodging tax, HB 4146 would also expand the tax beyond its core function of tourism marketing.   HB 4146 would add over $30 million in new tourism tax on a state with high tourist taxes and fewer competitive attractions compared to the big states.

Rural areas will be the ones left out of this giant new tax.   The Portland Tribune quoted local rural lawmakers on this:

“Rep. Cliff Bentz, R-Ontario, said hotel owners in his district do not expect the bill would help them. “I talked to many of my hotel operators across my district, and they were uniformly a ‘no,’” Bentz said. Rep. Gail Whitsett, R-Klamath Falls, said she agreed with Bentz.”

Note: The Portland tourism tax rating was based on a 2013 report from the Global Business Travelers Association.  The tourism tax was totaled by combining taxes on lodging, rental cars and meals by airport vicinity.   The report was also reported by USA Today newspaper on December 10, 2013.