There has been a spate of local media reports that Allen Alley is planning to announce a run for Oregon governor on Monday, March 7th.

Tuesday, March 8th is the last day for candidates to file to run in the 2016 primary. May 17th is Election Day for the primary.

The Oregonian reported back in October that Alley had “confirmed months of political whispers that he’s seriously considering a run against Gov. Kate Brown.”

Jeff Mapes, now at OPB, reported on Wednesday “Republican businessman Allen Alley has decided to run for governor and is looking toward a Monday announcement, according to several sources.”

The Salem Statesman Journal also reported on Wednesday that Alley seemed “to be getting closer to announcing a run for governor as a Republican,” and had met privately with elected Republican leaders at the Capitol.

Yesterday, Nigel Jaquiss at Willamette Week reported that “Allen Alley is highly likely to enter the Republican primary for governor next week, just ahead of the March 8 filing deadline.” Jaquiss also reported that polling was being done to test Alley’s name recognition and chances against incumbent Democratic Gov. Kate Brown, and that “Alley has also been calling potential donors and endorsers, gauging interest in his candidacy.”

On his 2010 Allen Alley for Governor web site, Alley states “I have not made a decision regarding running in 2016 but I am seriously considering it.” 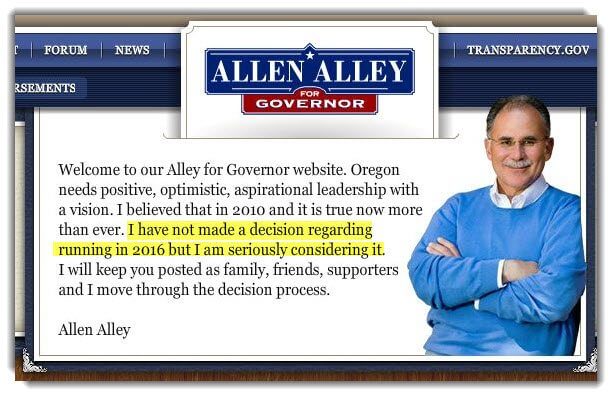 Allen Alley “was a tech world force as CEO of Pixelworks in the late-1990s and early 2000s,” was deputy chief of staff for Democratic Gov. Ted Kulongoski (where he oversaw “the policy areas of economic development, technology, transportation, workforce training, and energy”), ran for Oregon state treasurer in 2008 as the Republican nominee, ran for the Republican nomination for governor in 2010 and was unanimously elected Oregon GOP chair in January 2011 and served for two years.

Gov. Kate Brown (D) hasn’t filed to run yet. In Pendleton last September, she did say that she would be running for governor.

On competition for Alley in the primary, Mapes at OPB noted “So far, four Republicans have filed for governor. Bud Pierce, a Salem doctor, has received the most attention, in part because he and his family have put more than $500,000 into the race.”