In an essay published on Saturday May 7, 2016, Oregon Legislator Mike Nearman asked those who objected to his skepticism about Anthropogenic Global Warming to provide the evidence (data) that convinced them we are headed for a climate catastrophe. In response, he got the typical name-calling and other bad behavior we have come to expect from those thoroughly sold on the prevailing paradigm.

Most of us who actually are scientists realize that Nearman was precisely correct to request the robust empirical data that should back up all science, but in the case of Global Warming is substantially missing. Proponents like to confuse the issue by providing evidence of warming that could come from several natural sources and ignore the crucial question about a link to human activities. And when confronted with the ruse, some resort to calling opponents “absolute idiots.”

Of course, the only “absolute idiots,” are those who believe that science is too sacred to be questioned.

Scientists continually question prevailing wisdom to see if we can improve on it. When science first emerged out of the politics and religion of the seventeenth century with the formation of the British Royal Society, the founding members chose the motto “Nullius in verba” or “Take no one’s word for it.” That expressed their determination to avoid the domination of authority and to decide scientific matters by an appeal to data gathered by experiment. Once freed from the domination of politics and religion, science made amazing progress.

We need not concern ourselves with the great complexity of the earth’s climate but only the predictions of those who claim to be able to predict climate catastrophe from man-made CO2. Their predictions stem from billion dollar Climate Models that one would hope could justify their cost. But they do not.

Here is a comparison of their predictions with robust empirical data from NASA satellites and radiosondes. The two satellite data sets come from the two official NASA contractors (UAH and RSS), one alarmist and one skeptical. 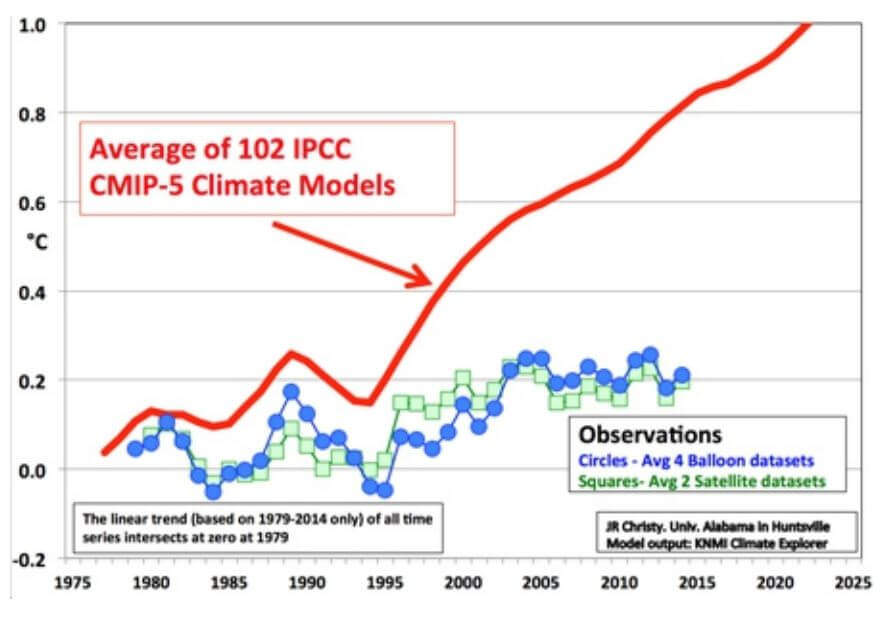 If anyone prefers a similar comparison from climate alarmists, he should look at the very last page of the supplementary information for Santer et al., PNAS 2013. There he will find a table that shows the Climate Models running hot by a factor of about two in temperature trend. While not exactly the same as the comparison from Professor John Christy above, it is also proof that the models are fatally flawed, and even alarmists who are members of the US National Academy of Sciences recognize it.

For those unfamiliar with “fatal flaws,” these are deficiencies so egregious that the entire paradigm collapses.

The government’s case against carbon dioxide is based on what they call “Three Lines of Evidence,” or three arguments. In addition to their assertion that the Climate Models are able to accurately predict the future, they assert that the slight warming we have observed has to be from carbon dioxide because of a ‘hot spot’ in the tropical mid-troposphere. And they assert that we have observed unusual global warming recently. None of these are remotely correct.

Over the seven decades since the end of the Second World War when human emissions of carbon dioxide increased substantially, temperatures have risen over only two of those decades. Two of seven decades is not a very good correlation. And we know that the increase that began in the late 1970s occurred in concert with a change in the Pacific Decadal Oscillation (PDO) known as the Great Pacific Climate Shift of 1977. That was ocean warming not greenhouse gas warming. It is similar to the El Nino warming we are currently experiencing that originates with warmer than normal sea surface temperatures in the Eastern Equatorial Pacific off of the coast of Peru. These last about a year and are typically followed by several years of the opposite condition known as La Nina.

When the PDO is in its warm state, we get more and stronger El Ninos over a period of several decades and hence generally warmer conditions followed by several decades of cooler conditions. We observed one complete PDO cycle in the 20th century, with the earth warming up to the Dust Bowl of the 1930s and then cooling off to the cold of the 1960s and 1970s. The cyclical nature of the earth’s climate is readily apparent in many individual station temperature data sets but not in the compilations cooked by alarmists. It is especially visible in the Arctic which responds strongly to ocean cycles.

Hence, the robust temperature data we have shows that our climate is cycling normally. The fact that there is nothing unusual going on that we have not seen before is another fatal flaw in the Obama Administration’s climate science.

The third fatal flaw is the complete absence of a hot spot in the tropical mid-troposphere. That is very obvious in this comparison: 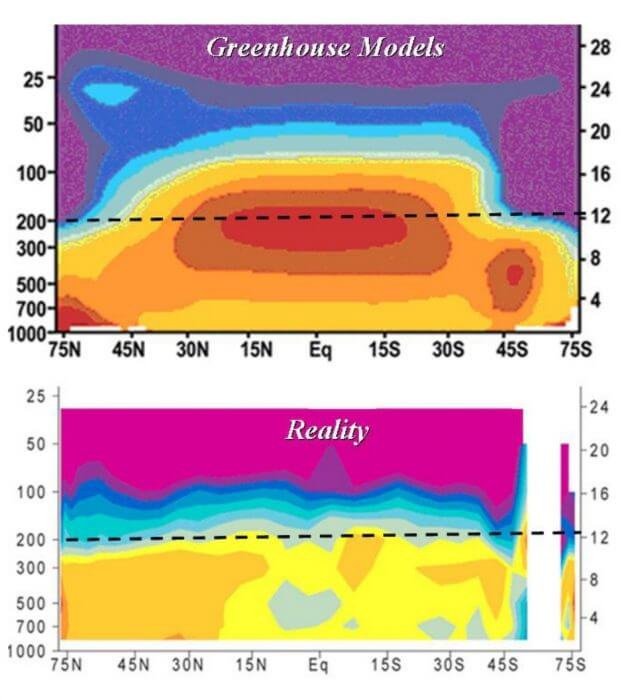 Nearman’s very proper request for robust temperature data completely vindicates him. And his worry about the quality of scientists coming out of Oregon universities is unfortunately well founded too.

For those who would like to research this further, they can find the government’s 3 LoE arguments in official Environmental Protection Agency documents and in President Obama’s very lengthy National Climate Assessment – 2014. Our detailed rebuttal to the NCA – 2014 can be found many places, including here:

This was written in an essay style to be easily accessible to a wide audience. It was signed by fifteen accomplished scientists and economists. For those who prefer similar arguments presented in a legal style and submitted under oath to the US Supreme Court, they can look at our merit stage brief here:

and at an earlier cert brief.

For the best global temperature measurements we have from NASA satellites, readers should go to Dr. Roy Spencer’s website:

where they will find not only the latest Global Temperature Anomaly (GTA) but a complete table of all the NASA MSU satellite temperature data from 1979 by region, and useful commentary from Spencer.

Gordon J. Fulks lives in Corbett and can be reached at [email protected] He holds a doctorate in physics from the University of Chicago’s Laboratory for Astrophysics and Space Research.