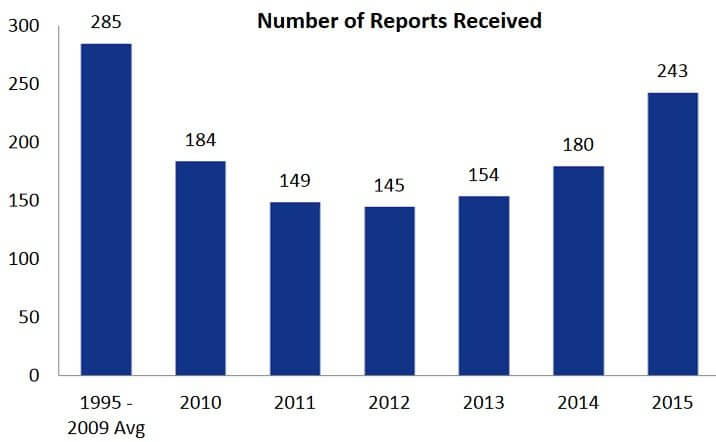 Oregon Secretary of State Jeanne Atkins released the annual report on Oregon’s government waste hotline. In 2015, the hotline received 243 initial reports. This continues an upward trend: there were 180 reports in 2014, 154 in 2013, and 145 in 2012. Data prior to 2011 is not comparable due to changes in the reporting system. Nearly half (47%) of 2015’s reports involved state agencies; the other reports involved local government entities.

Despite the increased number of reports, few resulted in any serious action. Eighty-three reports were closed immediately because they didn’t involve actual waste or the individual reporting did not provide sufficient information. Fifty-three reports were closed after providing the individual reporting with alternative contact information for another public body more appropriate to investigate the allegation. An additional fifty-one reports were directly referred to other agencies.

Fifty reports did require additional review – however, most of the allegations where not substantiated or did not involve state funds or resources. Of these, two have resulted in action taken with agency management. Another six reports are still open and may result in further investigation.

While there is not yet information about financial recovery relating to the 2015 investigation, the hotline has identified a total of $16 million in potential fraud, waste, and abuse since its inception in 1995.