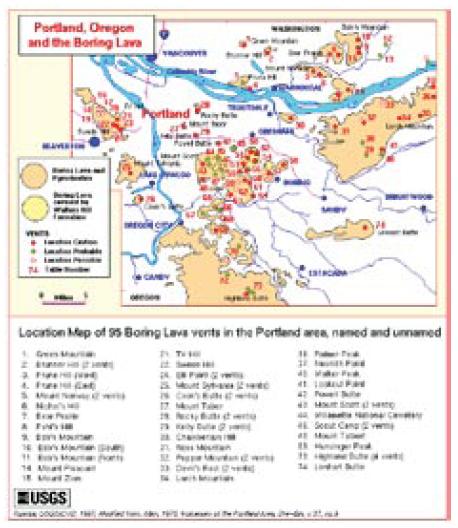 By Dan Phegley
As seen in,
NW Connection Newspaper

While Metro has taken great pains to show areas they do not want developed and produce maps showing natural resources, it is now known one very significant resource does not appear on their maps. Damascus could be sitting on a gold mine and it appears Metro wants to control it. The following information has all been discovered by Damascus residents and in various stages been presented to 3 current city councilors who have expressed interest but done nothing. No Metro or City planners contributed to this information, only citizens, but they could all read a map.

First the Gold: Hidden in the environmentally sensitive areas which Metro claims to want to protect and much of which is private property are volcanic vents. This is per the United States Geological Survey (USGS) volcanic map of the area. In the whole Portland region, the city of Damascus contains the largest concentration of these vents. A high concentration of these vents in a given area can be a strong indicator of some of the cleanest energy known to man. That is geothermal. This energy is very simple, hot water! Made by nature, cheap and very environmentally friendly.
Now enter Metro:. This possible source of cheap energy when given an overlay labeled environmentally sensitive zone on Metro’s planning map effectively prohibits exploration or development of this resource even on private property!

Metro who has an annual budget in 100’s of millions and is supposed to be the leader in mapping and planning seems to have missed these natural features, or assets.

Tale of two Plans:While Damascus citizens are now allowed to discuss two plans for their city they have one basic operational set of principles. These principles were set by an intergovernmental agreement approved by the Damascus city council on July 7th, 2008 (resolution 08-0194) which has the city abiding by Metro rules and goals in exchange for payments totaling $524,724.00. These rules are binding!

Not one councilor had read the regulations they passed.

“METRO GRANT. Metro shall provide grant funding to the City for certain eligible expenses associated with Title 11 compliance (Metro Code Chapter 3.07, the Urban Growth Management Functional Plan) for this Project that are associated with the city’s completion of those planning milestones….”

Not current Metro rules but just Metro rules. This allows Metro to redesign Damascus at will. The green ways ownership is unclear but what is clear, they become regional assets and as the only regional government Metro has made the rules.

The purpose of the Urban Growth Management Functional Plan can be found on page 4 of the plan,

“The purpose of this functional plan is to implement regional goals and objectives adopted by the Metro Council…. including the Metro 2040 Growth Concept and the Regional Framework Plan.”

Metro does not even pretend that any of this is local planning.

Future use, development and even evaluation of geothermal benefits hidden in our city along with any new discoveries or useful technology will need Metro’s permission and be Metro regulated. While a home rule city charter has protections and powers under the state constitution, Metro needs a city council willing to sell these powers at the right price.

Oregon Institute of Technology (OIT) is a national leader in the exploration and development of geothermal energy and while the main campus is in Klamath Falls, Oregon, the geothermal campus is located in Clackamas, Oregon.

OIT currently uses geothermal energy exclusively for heating their entire Klamath Falls campus. This includes heating sidewalks to melt ice and snow during the winter for safely getting to and from classes.

OIT in expanding its use of geothermal will soon be removing their campus from the power grid by generating their own CHEAP electricity.

OIT has a Geo-Heat Center which provides free technical assistance and information to interested parties. (geoheat.oit.edu)

None of this appears to matter to Metro, the city council or a small group of local activists interested in preventing a citizen vote.

On June 26, 2010 when Mayor Wright was interviewed by the Oregonian, the article pointed out “Some members of Metro, the regional planning agency, have expressed the view that they never actually expected Damascus to succeed as a city, that they were only acting to satisfy state law.”

1/16/09 in the Oregonian with Metro President David Bragdon, “Bragdon, who was a Metro councilor at the time of the 2002 decision, said he suspected all along that Damascus and the thousands of other acres added to the region’s urban growth boundary in 2002 would never develop as planned, even if the economy had remained healthy.”

Metro tries to make sure that even if their plan is a known failure it will still force residents to abide by their rules and Make city planning subservient to Metro plans. This effectively ends local control as any changes to their plan must be approved by the Metro council.

Oct 1, 2009 (Portland Tribune) an article by Jim Redden reveals Metro needs 10 billion dollars in new local taxes!…and that is just for current plans! “With the money, Jordan (Metro chief operating officer Michael Jordan) foresees the region growing into an interconnected series of neighborhoods where most residents can meet their daily needs by walking, bicycling or taking short transit trips from their homes to jobs, shopping and recreational opportunities.”

Sounds just like their plan for Damascus, not one mention of roads or cars.

While repeal of resolution 08-0194 would keep citizen involvement alive, adoption of either plan under these circumstances is one more step down Metro’s path.

Welcome to the new local control.