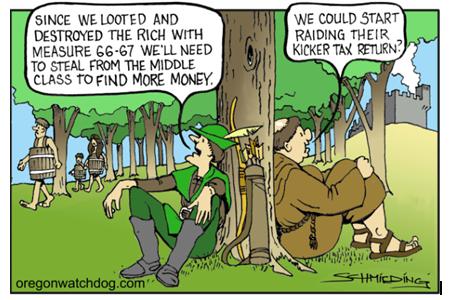 When Kulongoski’ announced his Decades of Deficit report the size of the pending $10.3 deficit was so large that it droiwned out media attention on Kulongoski’s solutions which of course included raising taxes. The Governor’s reset speech stated that “We must reform the kicker” and the reset report said “To increase state reserves, the Task Force recommended changing the revenue forecast methodology for the kicker.” The idea is to put part our Kikcer Tax refund into a reserve account. Previous sessions of taking the people’s Kicker Tax refund were not enough. Only by making a more permananet system of taking our tax refund will work. This new Kicker Tax refund raid comes just as last session they raised busines taxes on every single business, raised the income tax, the gas tax, health care taxes and taxes on death certificates. When will raising taxes ever be enough?

It is interesting to see in Kulongoski’s reset speech he says “We must find the political courage and will to do what is right – and give the citizens a better way to use kicker revenues.” But where was the political courage to reform state spending during the 8 years he was governor instead of announcing his overspending and debt problem during the last weeks of his term?
Beware taxes are coming