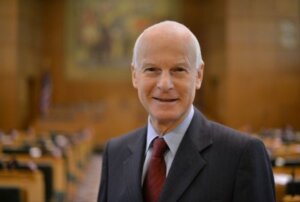 A diverse group of Republican lawmakers and party activists from across the state gathered in the Senate Chamber of the Oregon State Capitol on Friday for a truly historic event. Public seating was standing room only and spilled into overflow areas as Dennis Richardson (R-Central Point) was officially sworn in as Secretary of State, becoming the first Republican elected statewide in 14 years.

Congressman Greg Walden (R-Hood River) — who previously served with Richardson in the Oregon House — was a featured speaker at the ceremony.

“Dennis has a sharp eye for budgets and numbers, and an even sharper pencil. But he also proved he can work with others across the aisle.” — Congressman Greg Walden

After taking his oath of office, Richardson showed bipartisanship to his fellow Oregonians, noting that his goals were not focused on a party agenda, but good public policy.

“As a secretary of state, I will be functioning as an Oregonian. It is my commitment that you will not know whether I have an ‘R’ or a ‘D’ by my name.” — Dennis Richardson

State Treasurer-Elect Tobias Read and Senate President Peter Courtney were the only notable Democrats in attendance.