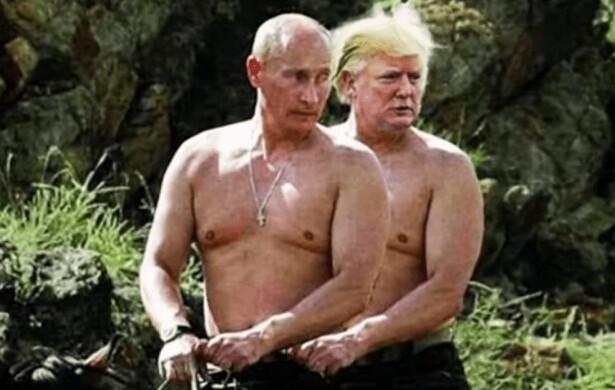 Thirty years ago ABC aired a provocative miniseries titled “Amerika” about a Soviet takeover of the United States. I watched it with my parents including ABC News’ panel discussions that followed every episode – heady stuff for a 7th grader. I was just starting to follow politics, as were my parents.

The entire set of 13 movies is now available to watch on YouTube for free. Here’s the first episode:

The irony, of course, remains easy to see retrospectively. This movie was produced as the Soviet Union approached imminent collapse. I find it similarly ironic that Russia, which remains a weak country, still so unrealistically captivates our security imagination.

Worse, those imagined fears have suddenly changed parties in just four years. Mitt Romney made the stark claim four years ago that Russia was our greatest geopolitical threat.

My how times have changed. Polling of Republicans’ views toward Putin immediately followed Romney’s lead in 2012, and it’s remarkable how quickly Trump’s bromance with this former KGB officer has changed Republican polling on Russia today.

Of course, the converse is true of Democrats. Part of this has to do with the esoteric nature of foreign policy. The national security experts of both parties tend to stand firm, with more in common with each other than Joe Public understands, while each party’s base sways in the wind of events.

Some Democrats are now taking it too far. Their narrative of a Russian takeover is reaching a birther like status. “Trump is Putin’s puppet” has become the new “Obama is a Muslim.” And “the Russians elected Trump” is the new “Obama was born in Kenya.”

Does Trump have a creepy admiration of Putin? Sure, but unlike Russia, we have strong institutions that will prevent authoritarianism here. Neil Gorsuch will strengthen one of them.

Did the Russians interfere in our election? Sure, but they probably intervened on George McGovern’s behalf as well, and there is no evidence of a material impact on either candidate’s level of success.

That President Trump might wean the GOP away from Woodrow Wilson’s now bipartisan goal of global hegemony is actually one endearing possibility that gives me some hope for a few good policy outcomes to weigh against the many bad. You’d think the party of Code Pink would see that too.

There is too much legitimate material out there for Trump’s opposition to get lost in its own analog of mindlessness. Democrats will do better if they stick to the issues.