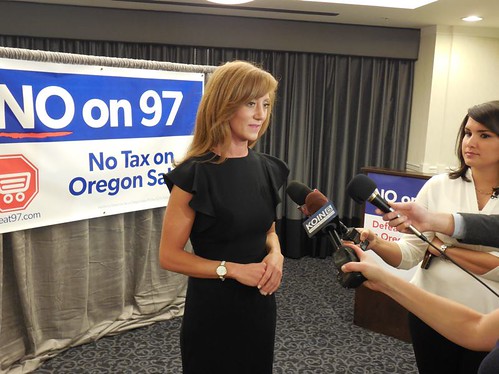 Rebecca Tweed was the Statewide Campaign Coordinator of the No on 97 campaign last year, the largest and most expensive campaign in Oregon history. A lifelong Oregonian, Tweed’s interest in public affairs nearly spans the course of her still very young life. If she didn’t have so much more future potential ahead of her, Tweed’s accomplishments so far would seem fitting for a lifetime achievement award.

Her first realization that there were things happening in the world that we should be paying attention to was Operation: Desert Storm. As a newly literate grade schooler, Tweed read the newspaper after school and watched the evening news every night, quizzing her parents profusely: “What does this mean? Why are we there?”

Her parents gave Tweed more than pat answers. They gave her encouragement to pursue these mature interests. Tweed’s parents raised her and her brothers to be thoughtful of others, to stay aware of the world around them, and to question the status quo if they thought it could be improved.

A year later, Tweed organized a mock election in her southeast Portland grade school cafeteria. Like the adults, more of her classmates at Lynch Wood Elementary voted for Bill Clinton than George HW Bush.

This childhood curiosity ripened to a real passion in high school. During a summer break, Tweed attended a program at Stanford University for debate and government that solidified for her what she wanted to study in college. Tweed knew she needed a top political science department.

In Syracuse University, she found exactly what she was looking for. Its combination of scholastic rigor and flexible programs allowed her to triple major in Political Science, Public Policy, and Philosophy. This leading university was a big change for a pastor’s daughter from Estacada, Oregon. Tweed tells me that “it opened my eyes up to an entirely new world of thought.” She went on to say:

The diversity of the students at the university, the emphasis they put on an intense educational experience and personal philosophical development was significant and it was the best decision I ever made. I didn’t know what I didn’t know about the world. It’s amazing what you can learn when you step outside of your comfortable environment – new people, diverse backgrounds, different passions and unique perspectives.

Her summers were lively too. Tweed won big next June on The Price is Right, wearing an orange, homemade “Syracuse loves Bob Barker” T-shirt.

In college it appeared Tweed would remain true to her first love: international relations. While studying in Florence, Italy she wrote her honors thesis on the European Union, a brilliant work which you can read here.

But alas it was not to be. After a brief stint as a foreign affairs writer for Fox News, she was visiting friends and family back home when she agreed to meet Chuck Adams for coffee. He offered Tweed a job with his political consulting firm, working on various campaigns across the state, and she decided to give it a try, promising herself she’d leave and go back to New York after that first election. Yet, here she remains, 12 years later. Tweed tells me her strong interest in international policy remains “a passion that still exists, but for now, I want to help make Oregon better.”

For a few years she quietly racked up wins and was known only among her consulting peers as the young Syracuse grad they wished they’d hired. Rick Thomas of Quinn Thomas Public Affairs told me:

I first met Rebecca when she was fresh out of Syracuse and just moving back to Oregon to find a job.  Unfortunately, she took another job before I had the chance to offer her the position I was interviewing her for. We’ve worked together many times since and she’s one of the most tenacious and hardworking people you’ll meet.  You’ve got to get up early and stay up late to find a time of day where she’s not going to be right on an email or text.  That’s hard to find but it’s especially hard to find here in Oregon.

A couple of high profile victories with her fingerprints all over them soon made Tweed one of the most sought after talents in this state. In a year that the Tea Party wave largely missed Oregon, she was the Political Director for the Oregon House Republican Caucus, helping lead the Oregon House to a historic 30-30 tie between Republicans and Democrats for the 2011 legislative session. Oregon Senate Republicans didn’t have a Rebecca Tweed that year, acting like a natural experiment when they came up short like Jim Huffman and Chris Dudley.

The campaign that catapulted her to the top of her profession was 2014’s No on 92, defeating a seemingly unstoppable quest to use mandated government warning labels on food to trick consumers into thinking there’s an officially sanctioned basis for fearing GMOs. This caught the eye of Portland Monthly which included her as one of the “10 Amazing Women Who Are Changing Oregon,” taking note of how Tweed applied a coherent vision of limited government to all needless government regulation, which allowed her to work with all kinds of people. Tweed said:

I got a call from Oregon United Against Discrimination because I happen to be a pro–gay marriage Republican. It was exciting because I was collaborating with people I’m normally on the other side of the table from—it was like, “Look, Republicans can be cool and normal! We don’t hate everybody!”

Pat McCormick of AM PM PR remembers this as the moment Tweed became the recognized state-wide leader she is today:

When many of us who were part of the GMO-labeling measure campaign were retained to mount the campaign opposing the $6.1 billion gross receipts tax (Measure 97), Rebecca was the consensus candidate to take on the role of overall campaign coordinator. That required managing a diverse and experienced team of consultants and providing daily oversight of the myriad details of the campaign. As part of that team, I knew that if my to-dos weren’t done, Rebecca would gently but persistently remind me until all tasks were current.

They chose wisely. The fight over Measure 97 was an epic struggle for Oregon. Her campaign had money, but it won because Tweed knew it needed at least as strong a grassroots effort as the measure’s supporters automatically had through public sector union support. More importantly, she actually knew how to organize one.

Tweed raised an army. Amassing a broad coalition of over 27,000 individuals, businesses, farmers, educators, medical professionals, and other folks crossing party and ideological divides to support the effort and communicate the facts about measure 97 with their diverse audiences. The mistaken idea that ordinary people would pay none of this tax was never allowed to gain traction.

Tweed’s unique organizing skills had a significant impact on the No on 97 campaign’s ability to share its message in a year that demonstrated money isn’t everything in politics. From Roger Staubach to Troy Aikman to Tony Romo, sometimes the quarterback is the most important factor.
She’s a Republican that always seems to win, something that until now has been as rare in the Beaver State as a unicorn. In the small world of Oregon politics, we have a new star quarterback.