A few months ago I made the mistake of signing up for Governor Kate Brown’s “Social Action Team” which coincidentally is just her campaign email list.  I like to know what is going on in Oregon politically, so I figured this would be a great way to stay up to date on what our Governor is doing.  Here are just a few of my experiences.

On March 14th I received an email about how “right-wing national Republicans are serving up their anti-women agenda.”  The very next day March 15th I received another email about how “The health plan from national Republicans would be a major reversal for women’s rights.” and during Women’s History Month no less!  Of course to fight back against those anti-woman bastards in the GOP, at the bottom of the email we were encouraged to donate $10 or more to Kate Brown’s campaign committee.

On March 10th I received an “Alert” from Kate Brown soliciting donations to her “Healthcare Defense Fund”.  She only needed 48 more donations to reach her goal, so of course it was very important that I kick in $10 or more to “send a strong message to radical national Republicans to keep their hands OFF our healthcare. Please, pitch in before midnight and help us fight!”

On March 1st I received an email that wasn’t trying to squeeze any money out of me.  This time I was encouraged to share a Facebook post alleging that the President was not capable of comprehending that women could be Governor’s because he welcomed them “and their wives.”

Kate Brown was fighting back against this slight and she wanted me to help by sharing this post on my Facebook page. 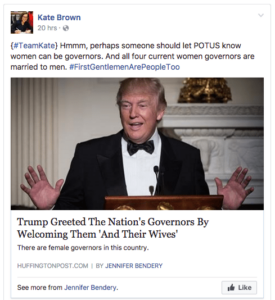 While all of these emails are slightly annoying, it demonstrates that despite being in the thick of a legislative session, Kate Brown is still firmly in campaign mode.  These emails I mentioned here are only a select few of the ones I have received since signing up for the Governor’s “Social Action Team”. Her campaign is constantly lobbing partisan attacks about healthcare, the so called “War on Women”, and whatever topic is in the new that day in an effort to add dollars to her campaign funds, despite already sitting on more than 1.1 million dollars.
Following the 2016 election I think many people wanted a reprieve from politics, but I fear we now live in an era of perpetual campaigning.  It seems that Kate Brown has no intention of giving up the fight, and as conservatives here in Oregon, neither should we.