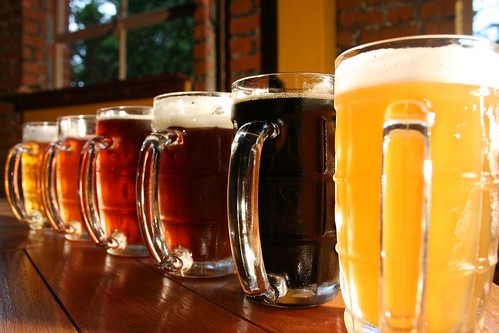 Josh Lehner, the super smart protégé of Tom Potiowsky at the Oregon Department of Economic Analysis, posted an interesting fact on his agency’s blog recently. More new jobs were created producing alcoholic beverages than writing software from 2008-2016. Oregon’s software industry has been growing rapidly in the past decade, but that has gotten lots of attention over the years. Until Lehner made this contrast, Oregon’s robust array of breweries, wineries, and distilleries have largely been taken for granted. 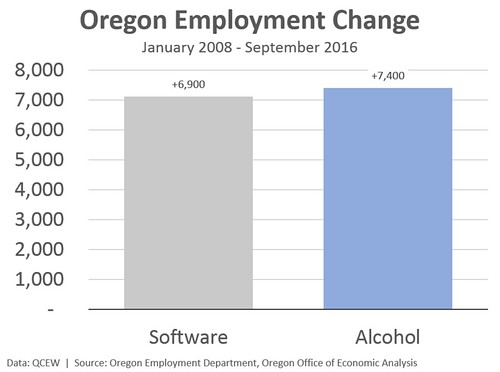 There is heavy government support for Oregon’s software industry, which is always in a chronic labor shortage of code writers. There is no shortage of Oregon residents interested in producing potent potables, but if you were a regular reader of state economic development plans, this sector gets treated as an afterthought.

The Oregon Business Plan, the flagship of the Governor’s economic development initiatives has a page on its website devoted to the planner’s favorite buzzword, describing what a “cluster” is. This page also has an Oregon list of these sought-after geographically concentrated sectors. Oregon’s manufacturing of happy hour didn’t make the list, though to be fair one of their dropdown menus does have this new link to “breweries” which includes some interesting facts such as: “9 of the top 50 brewing companies in the US make beer in Oregon. Five are headquartered in Oregon: Widmer Brothers Brewing, Deschutes Brewery, Full Sail Brewing, Rogue Ales and Ninkasi Brewing Co.” Yet there was not even an honorable mention of that other cluster in Dundee, Oregon. 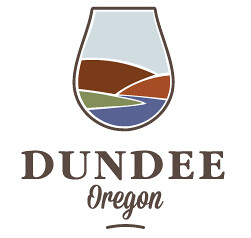 In Forest Grove there’s man that straddles both of these fast growing industries. Jonathan Kaiser is a senior program manager at Jive Software and owns a brewing company that in my opinion brews the best beer money can buy. Indeed, I had a keg of his “Weddingweizen” at my own wedding two years ago, and it was a big hit. Of all the many ways you can blow money on a marriage ceremony, there’s probably no better bang for the buck than a high quality craft beer on tap and Kaiser Brewing Company delivered in a big way.

While government planners tend to bend over backward for software companies, starting a brewery, winery, or distillery can feel like the opposite is the case. Kaiser wanted to get all of his permits approved at the same time so he could produce for a full year before having to pay for their renewals which would then hopefully all expire at the same time. That was largely possible with state and local licensing, but the federal Alcohol and Tobacco Tax and Trade Bureau is inexplicably slow and unpredictable in its approval process, throwing off Kaiser’s intended timing of his initial roll out.

Of course the feds have been worse. The most heavy handed of all regulations in American history was probably the 18th Amendment. Today’s “tax and trade” bureau is largely a legacy of Prohibition, imposing an excise tax on the production of alcoholic products we would never impose on technology products.

Oregon passed its own state-wide ban four years before the 18th Amendment was ratified. The Oregon Liquor Control Commission enjoys a similar legacy existence as the TTB.

Legitimate health and safety regulations are best administered at the county level. These federal and state entities seem to exist primarily to impose redundant restrictions and taxes to support their superfluous operations.

The 21st Amendment might be described as the greatest act of deregulation in American history except that it did not exactly restore the status quo ante of America’s free liquor market in 1919 (or for Oregon that’s 1915). I’m open minded to the possibility that the TBB and OLCC might serve some net benefit of some kind, but there is likely much opportunity for removing needless duplication of costs imposed on a sector of Oregon’s economy where we seem to have a clear comparative advantage.

I also don’t want to dismiss all efforts that have been made to attract software companies to Oregon. When they can find the talent, these companies employ a highly compensated work force. The lesson of Lehner’s comparison is that economic opportunity can come from where government planners might not expect it. Job growth doesn’t necessarily need government help. It sometimes just needs the government to get out of the way.