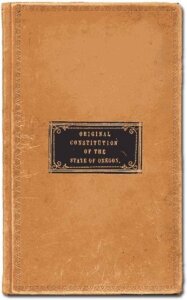 In 1859, Oregon became America’s 33rd state. The authors of Oregon’s Constitution wisely term limited Oregon’s Governor, Secretary of State, and Treasurer. These founding citizens realized that politicians consolidate power when elected to political office. With increasing time in office, political power only increases. Special interests, including the very wealthy, big business, and powerful labor, ask for favors in exchange for political support. These favors generally enhance the control and the ease of living for these special interests and their members, to the detriment of ordinary everyday Oregonians. The political class controls the machinery of government, and incumbent office holders are shielded from accountability by the bureaucracy. Many political office holders seek to control the press, to control information available to the public.

While there are term limits for Oregon’s Governor, Secretary of State, and Treasurer, there are no term limits for members of Oregon’s State Senate or State House of Representatives. At the founding of our state, our state government was weak and only had minor impact on the daily lives of Oregon’s citizens. Over the past 158 years, the size and influence of federal, state, and local government has increased dramatically. Citizens labor from January into May to pay their increasing burden of taxes. The laws and rules of federal, state, and local governments number in the millions. Because of the power of Oregon’s state government, the 90 elected members of Oregon’s Senate and House have enormous impact on the daily lives of Oregon’s citizens through their rule-making and taxation policies.

Sadly, Oregon’s legislature is failing Oregon’s citizens. We need reform of our educational system that fails so many of our students. We need frugality and increased efficiency of state government. We need tax reforms that reward work and investment. Oregon needs dramatically improved infrastructure, affordable housing for our citizens, an end to homelessness, and effective treatment of our mentally ill. Our current legislature, which is dominated by career politicians, is unable to muster the courage to pass legislation to solve these problems. We need to solve the legislative timidity and gridlock to improve the lives of everyday Oregonians.

The answer is to elect new political leaders. We need new leaders with the courage to take on the challenging issues of our time. We need leaders who do not fear the next election, but who relish the challenge of solving the unsolved problems. We need people to represent us who can take the “tough vote.” In every election, challengers do arise to take on no-action incumbent politicians. Yet, incumbents win due to the power of special interests, control of the bureaucracy and control of the press. What is the answer?

We should return to the wisdom of the writers of Oregon’s Constitution. Let us term limit Oregon’s legislators to eight years of service out of every 12 years. This will allow new people to step forward to be elected to legislative office and new opportunities to solve our intractable problems. Term limits will allow legislators to step away from the Legislature, to re-connect with Oregon regular citizens as non-politicians, and to still stand for re-election. This is the balance that we are looking for; this is the way to create great legislative bodies.

Let us work together to make term limits happen to give Oregonians a chance to solve our state’s problems and move forward.