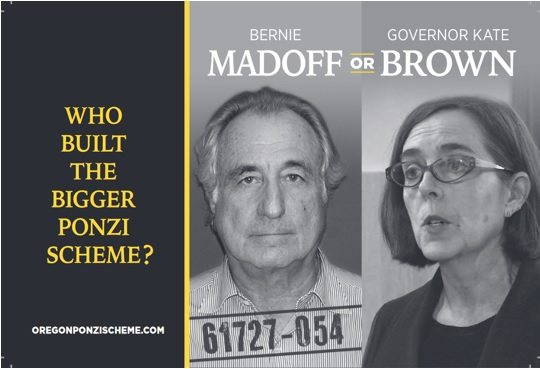 April 26, 2017 — The Self-Serving Politicians are Driving Oregon into Bankruptcy Coalition has begun a statewide ad buy to educate Oregonians on the $22 Billion PERS deficit crisis and how Oregon and its political leaders have gotten into this deficit. You can view the website at OregonPonziScheme.com. This is the first ad of a series designed to report on the Coalition’s research and inform Oregonians.

Coalition spokesman, Jeff Kropf, stated “PERS is nothing more than a Ponzi scheme that is driving local and state government towards bankruptcy. Self serving politicians who benefit from PERS are not going to fix it even though it’s going to hurt Oregonians”

“Oregon citizens need to know how this happened and why it isn’t being corrected before it devastates schools, police and fire” Kropf said.

— You can view the website here at Oregon Ponzi Scheme.

— Learn more about the Self-Serving Politicians are Driving Oregon into Bankruptcy Coalition here.

— About Jeff Kropf:  The honorable Jeff Kropf is a former state representative who served for eight years. He was one of the rare lawmakers who refused to be in the taxpayer funded PERS program and refused to accept PERS benefits even though all lawmakers were entitled to it. Kropf believed PERS was a serious conflict of interest and it was setting taxpayers up into a costly Ponzi scheme — which turned out to be true.