There are few political epithets that are as marginalizing as being called a “denier,” because that word naturally evokes in our minds the crackpots that deny the Holocaust. It can be inappropriate in a scientific context to marginalize doubters, because true science has always been driven by skepticism and the falsification of conventional wisdom, not dogmatic adherence to a consensus.

In a debate about probabilities, it’s been unwise to frame this as a binary conflict between the common folk that don’t believe in climate change and an establishment that does, because among the set of people who do believe in climate change, there are many environmental extremists that deviate just as far from the scientific consensus as the so-called deniers. The latest forecast of the International Panel on Climate Change (IPCC) is really quite modest compared to the doomsday imaginations of street-marching activists.

Having a belief that we face a far larger increase in temperature than the IPCC actually forecasts should then be considered just as unscientific as those who have beliefs below that consensus. They’re given a pass in the broader narrative, because conservatives so poorly position themselves on this issue. 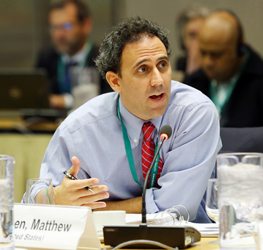 Were we to take as a hypothetical given that the status quo rate of emitting greenhouse gasses will warm our planet by about two degrees Celcius a century from now as the IPCC thinks is likely, that’s not the end of the conversation as to what to do about it as a matter of policy. Yale University economist Matthew Kotchen really drove that point home to me last week as I sat listening to his delivery of Portland State University’s annual Harold Vatter Memorial Lecture.

Kotchen told an audience, filled mostly with environmentally friendly progressives, that the social cost of carbon is only $40 per metric ton. That’s the scientific consensus, and it’s a remarkably low number. I have seen other economists warn Portland State audiences that any tax on carbon pricing it below $80 will have no material impact on our regular use of fossil fuels.

Were we to tax carbon at $40, that would almost amount to doing nothing. A Pigovian tax like that would be a total policy solution. Carbon’s cost, as a negative externality, would then be priced into our economic decision making. There would no longer be a rational need to worry about our “carbon footprint,” no need for command and control regulations saying how fuel efficient automobiles must be, no mandating our utilities buy a certain amount of wind and solar electric generation, no need to subsidize “green” energy either, and no need to block LNG terminals and pipelines for the sake of reducing carbon emissions.

If you look at the cost per ton of carbon saved by most environmental policy today, you’ll find the price we’re paying tends to be higher than $40. Were we to implement a revenue-neutral national carbon tax, it could put an end to that and would probably be one of the greatest free-market economic reforms that would be passed in a bipartisan fashion.

Fossil fuels would, of course, become a bit more expensive than they are today. The quantity demanded would decline some, or at least its rate of growth would decline.

That quantity of fossil fuels consumed at the after-tax price would be the socially optimal amount, according to the scientific consensus. It would probably not be a radical departure from the amount we burn today. One big thing that would change, however, is that there would be only one kind of climate denier left: activists demanding that we do more, people who reject the scientific consensus that it’s possible for a climate policy’s costs to exceed its benefits.