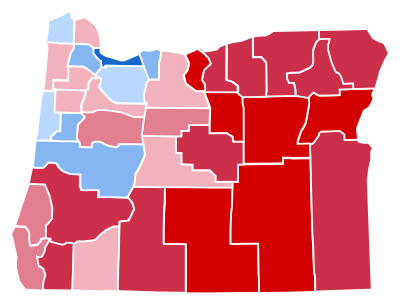 If the Democrats have their way, the 2018 election here in Oregon will be a referendum on President Donald Trump.  Oregonians have very strong feelings about the President, so let’s dig into the numbers and see what parts of Oregon are still on the Trump Train and which parts seem to be in the firm grip of The Resistance.  In other words, where does Trump have coattails that 2018 Republicans could ride and where is the President likely to be an anchor on local candidates.

Multnomah, Washington, and Clackamas counties are not fans of President Trump.  In Clackamas the Trump/Pence ticket received 88,392 votes or 41.30% of the vote.  Compare that to Bud Pierce, who won Clackamas County with 100,882 votes or 48.35% of the vote and Dennis Richardson who won with 105,801 votes or 52.31%.  Those are some pretty stark differences in one of our biggest battleground counties.  Given these numbers it is very likely that Democrats will attempt to tie Republican candidates to the President as much as possible in Clackamas.  The numbers show that the residents of Clackamas county are open to voting for the right Republican, but the President may weigh down candidates who fail to establish their own brand.

No surprise here, but Multnomah County, heart of The Resistance, doesn’t like President Trump.  The President received only 17.03% or 67,954 votes in Oregon’s most populated county. Comparatively Dennis Richardson received 27.90% or 103,088 votes from Multnomah residents, an extremely impressive showing for an Oregon Republican.

The real heart-breaker is Washington County.  Not only did Hillary Clinton defeat President Trump 56.92% to 30.90%, but even Brad Avakian was able to defeat Dennis Richardson 47.03% to 44.00% in Washington county.

There is a strategy for Republicans to achieve a degree of success in the Tri-County area, especially in Clackamas, but following closely in footsteps of President Trump is not that strategy.

If you cross over the Cascade range and get out in God’s County, you are sure to find your share of Trump supporters.  Trump/Pence had solid victories out in Baker, Gilliam, Grant, Harney, Malheur, Morrow, Sherman, Umatilla, Union, Wallowa, and Wheeler Counties.  Trump performed in line with Richardson and Pierce in most of these counties and slightly better in some of them, Baker, Grant, and Malheur to name a few.

Republicans continue to perform well east of the mountains, the President included.  Candidates in those areas should be able to lend their support to President Trump without facing too much of an electoral backlash, even though they could take heat from the mobilized left at public events.

Central Oregon is a bit of a toss up when it comes to President Trump.  Crook County went for the President by 69.92% and Trump even won Deschutes County 46.36% to Clinton’s 43.07%.  But when you dig a little deeper you see differences between folks in the heart of Bend and the rest of Deschutes County.  House District 54, Knute Buehler’s district went pretty heavily for Hillary Clinton.  President Trump received a little less than 35% of the vote in that area. Buehler had to outperform the President by more than 5,500 votes in order to hold on to his seat.

So while Bend may not be on the Trump Train, it seems like the rest of Central Oregon is all aboard.

So the Valley is another mixed bag for Trump.  Benton County, home of the Oregon State Beavers, rejected Trump pretty firmly in the 2016 election, giving Hillary Clinton 59.88% of the vote to Trump’s 27.58%.  Yamhill, Polk, Linn, and Marion Counties all went for Trump in 2016, not in overwhelming numbers, but with definite success in the more rural areas for Trump.  As to be expected the more populated areas of Salem were not as Trump friendly as the surrounding areas.

If we look at House District 20, represented by Democrat Paul Evans, made up of parts of Marion and Polk counties, we see a district where voter registration leans slightly Democratic, but both Bud Pierce and Dennis Richardson were able to get wins, both taking about 50% of the vote in the district.  Donald Trump however lost to Hillary Clinton in the exact same area by around 7%.  Much like Clackamas, this seems like an area where a Republican could be successful, but not one in the vein of President Trump.

By this point you are probably noticing a serious Urban/Rural divide in these numbers, and that holds up in Southern Oregon as well.  Lane County, primarily driven by Eugene residents firmly voted against Donald Trump, his ticket only receiving 34.98% of the vote in Lane.  The more rural counties of Klamath and Josephine went for Trump with 66.98% and 60.42% respectively.

Jackson County is the interesting one, the county itself voting for Trump/Pence with 49.27% compared to Clinton’s 40.66%.  Ashland of course remains a Democratic stronghold in Southern Oregon.  Because of the way Jackson County reports their precinct election results, I can’t get exact numbers, but from what I can tell President Trump got a little over 50% of the vote in House District 6, where Sal Esquivel serves as State Representative, and somewhere in the 35% ballpark for House District 5, Peter Buckley’s former seat, now held by Representative Pam Marsh.

Here is where things get the most interesting.  Currently Democrats hold the majority of state legislative seats from the coast, but parts of the Oregon Coast love Trump.  Trump won Curry County with 57.19%, Coos County with 57.05%, and Tillamook with 47.37%, although he did take loses in Clatsop and Lincoln counties.

Trump won House District 9, currently held by Democrat Caddy McKeown by almost 10 points.  If there are any opportunities for Republicans to get pick ups in 2018, I would look to the coast.

My advice would be the same for almost any other political issue: be honest, but know your district.