Donald Trump is not doing well in polling against Hillary Clinton.

On Thursday former George W. Bush White House press secretary and Fox News political commentator Dana Perino wrote “about the state of the GOP Presidential race: it is not good.”

Perino goes on to write “No candidate has been this behind in August and gone on to win. But I recognize that Trump is unlike any candidate America has ever seen. Yet if the size of one’s rallies translated into votes, Bernie Sanders would be the Democratic nominee right now.

There is, of course, a first time for everything, and I am not saying this election is over. I believe the polls will tighten after Labor Day. How this contest is waged and how both candidates perform in the upcoming debates in the next eleven weeks will determine that.”

This is a different state of affairs for Trump than during the GOP presidential primaries – where Trump usually led in the polls.

The current Real Clear Politics presidential polling averages show Hillary with a +5.3 advantage over Trump in polling between August 1st and August 20th. A Real Clear Politics snapshot of the 2016 presidential election has Hillary with a +18.0 favorability rating, Hillary leading in betting odds 79.0 to Trump’s 21.0, and Hillary leading in the battleground states. 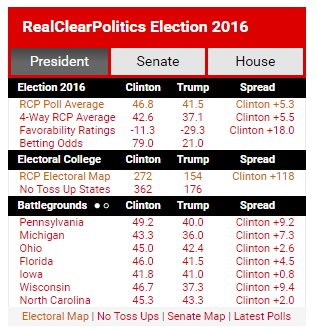 CNN is even talking about the possibility of a Clinton landslide “if Trump can’t win all of the reliably Republican states in the South and West.” CNN quotes a political science professor from Ohio “At this point, a landslide is a real possibility. The fact that reliably red states like Georgia, Arizona, and Utah are in play point toward a huge potential triumph for Hillary Clinton.”

“It ain’t over till it’s over”

Regardless, for Trump supporters and for those who do not want to see a Hillary Clinton victory in November, here’s a cautionary note on polling.

Investigative journalist Sharyl Attkisson recently tweeted this blast from the past: a February 2004 Gallup poll with this Gallup headline “Kerry, Edwards Lead Bush by Double Digits Among Likely Voters.”