Earlier this week Nigel Jaquiss wrote that the proposition a “growing population means more traffic” is a shaky assumption. I admire his making a contrarian point, and I’ve long been an admirer of his writing for Willamette Week, but let’s subject that point to some further scrutiny.

Jaquiss shows a graph depicting how vehicle miles were relatively flat for the last decade. Yet our population grew by 12% during the same time period. 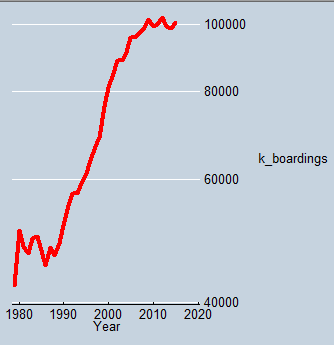 So how did these people get around? Metro planners might like to believe that, congruent with their motto “congestion is our friend,” traffic jams have successfully forced more Oregonians out of their vehicles and into mass transit.

That hypothesis can be tested by producing a similar graph using TriMet’s boardings data during the same 1979-2015 time period. It shows a flattening out in the past decade too.

The reasons should be obvious. First, after 2004, retail gasoline prices began to spike. Second, there was a significant decline in economic activity starting in 2007. That meant less commuting.

Jaquiss seems to get the latter explanation and tries to preempt this objection by saying: “Oregon’s economy grew tremendously from 2004 through 2015. One measure of that economy—total personal income—grew from $112 billion in 2004 to $176 billion in 2015,” but that’s probably not the right metric to measure economic activity in relation to traffic. A modest number of wealthy Californians moving into the Pearl District can skew total personal income upward. A better metric is total employment. As more people work, more commuters will need to get to work. We can see this relationship between transportation and employment by graphing Oregon’s employment numbers onto the same time frame. Doing so shows that same flattening in the past decade but also shows a recovery in employment just as Jaquiss’ graph shows a sudden, rapid recovery in vehicle miles driven.

Also, Oregon’s recovery has been uneven. The Oregon Employment Department reports most of that job recovery has been in the Portland Metro area, concentrating commuting and freight shipping into a smaller area where bottlenecks on the I-5, I-205, and HWY 217 are increasingly costly for most of this state’s economy.

The question then is, should we be planning on high gas prices and low employment numbers? It’s hard to find an energy consultant or labor economist that would predict we should. The consequences of our new ability to extract shale oil and the dynamic creative class that has been moving to Oregon make betting on another decade like the one we just passed appear to be more of a shaky assumption.