By Self Serving Politicians Are Driving Oregon Into Bankruptcy Coalition,

Kate Brown said “PERS ought to be fixed but now is not the time…” (Oregonian September 8, 2002) 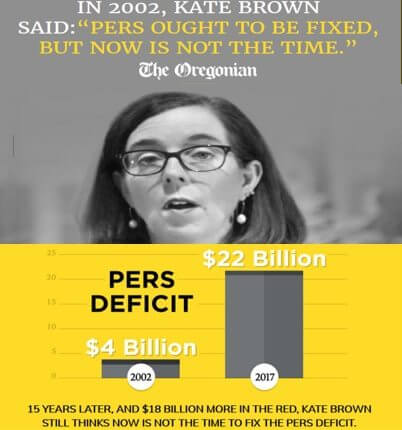 Since becoming Governor, Kate Brown hasn’t introduced a single piece of legislation or hosted even one public meeting to solicit solutions.

“We are standing at the very precipice of financial devastation that threatens the heart of public school funding, public safety, our decaying roads and bridges, and health and human services. That’s why The Self Serving Politicians Are Driving Oregon Into Bankruptcy Coalition came together”, according to former legislator and spokesman Jeff Kropf. “In order to fix the PERS crisis we have to first come to terms with whom and what caused it. That’s the purpose of our research.”

This coalition of six Oregon public policy organizations is investigating the conduct of public officials and their role in creating the Public Employee Pension disaster. The coalition is conducting a statewide educational ad campaign reaching hundreds of thousands of Oregonians.