In an election year in which conventional wisdom said voters were looking to dismantle the establishment and give newcomers a chance to lead, Oregon’s gubernatorial outcome was something different. In many competitive races we saw issues rule the day, and qualifications and experience were a distant afterthought. But in Oregon, John Kitzhaber’s qualifications were a major factor in his victory.Chris Dudley was perceived more likely than John Kitzhaber to cut state government spending and had a narrow numerical advantage over Kitzhaber when it came to improving the economy and schools. At the same time, however, Kitzhaber was perceived better than the Dudley when it came to being qualified to be governor. These are findings are from a Moore Information poll conducted October 27-28, 2010, the Wednesday and Thursday before Election Day. 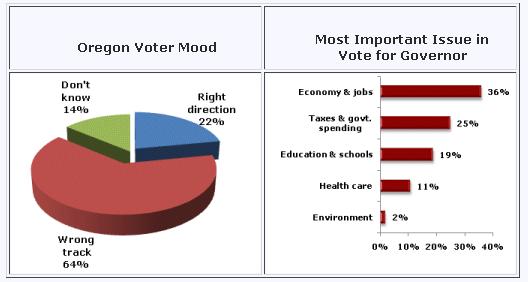 The climate in Oregon was ripe for a changing of the guard in terms of the party in power – just 22% of voters believed things in the state were generally headed in the right direction, while 64% believed things were pretty much off on the wrong track. Generally speaking, high levels of pessimism have spelled trouble for incumbents, as pessimistic voters are more likely to turn out on Election Day to express their discontent. It was also clear that Oregonians’ infatuation with President Obama has cooled. Today, the President’s disapproval level equals his approval level (47% approve and 46% disapprove of the job he is doing). Finally, in this election, voters told us the single most important issue in their vote for Governor was the economy and jobs (36%), followed by taxes and government spending (25%), education and schools (19%), health care (11%) and the environment (2%). 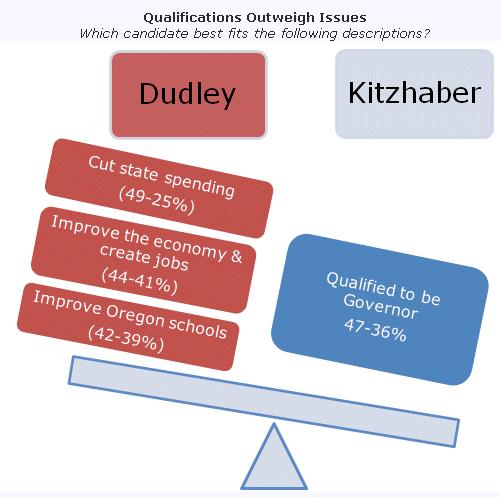 Based on these data, the Dudley campaign was effective in presenting their candidate as a viable alternative to Kitzhaber on the issues voters were most concerned about, but at the end of the day, Dudley could not overcome the qualifications gap.
Please feel free to call or email with any questions.