A study by Americans for Tax Reform compared states gaining and losing Congressional seats in the decennial reapportionment process and found that states gaining seats had significantly lower taxes, less government spending, and were more likely to have “Right to Work” laws in place. Because reapportionment is based on population migration, this is further proof that fiscally conservative public policy spurs economic growth, creates jobs, and attracts population growth.

There are eight states projected to gain at least one Congressional seat. Texas will gain four seats and Florida will gain two. Arizona, Georgia, Nevada, South Carolina, Utah and Washington are poised to gain one seat each. The biggest losers will be New York and Ohio – both projected to lose two seats – while Illinois, Iowa, Louisiana, Massachusetts, Michigan, Missouri, New Jersey, and Pennsylvania are on track to lose one seat each.

The average top personal income tax rate among gainers is 116 percent lower than among losers. The total state and local tax burden is nearly one-third lower, as is per capita government spending. In eight of ten losers, workers can be forced to join a union as a condition of employment. In 7 of the 8 gainers, workers are given a choice whether to join or contribute financially to a union. The details of ATR’s study follow: 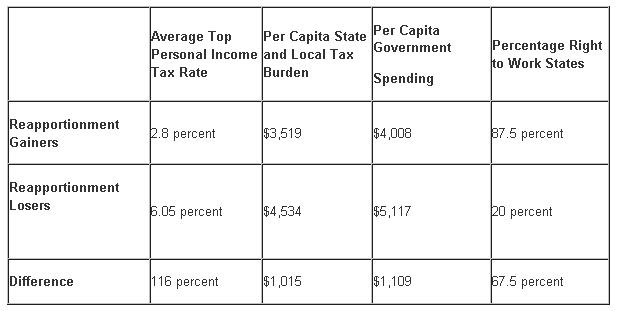