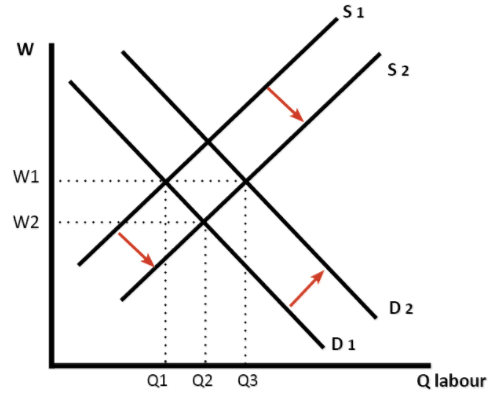 A common mistake I see some conservatives make when embracing excessive government regulation of immigration is the belief that lowering the number of immigrants will increase native born workers’ wages. This comes from a failure to fully understand basic economics.

The idea that if the supply of something increases its price will tend to fall is widely known. Less known however is the fact that this principle contains an assumption: ceteris paribus. A Latin phrase thrown around by economists ever since Alfred Marshal included it in his classic 1890 textbook Principles of Economics, it means “other things held constant.”

When we increase the supply of labor, the demand for labor does not remain constant. It increases too.

The Folk Theory of Labor Markets mistakenly conceives of an economy with a fixed amount of jobs where immigrants are just more competition for an unchanging amount of employment opportunity. Reality is very different.

Our labor markets are dynamic, not static. When someone works a job, he’s paid only a fraction of the GDP his labor generates. That surplus value creates more jobs beyond the one he filled, jobs that would not exist if that person was not in the labor force in the first place.

The Folk Theory of Labor Markets is clearly disproven empirically. If it were true, rural workers would tend to be paid more than urban workers. The opposite is the case. Where we find the densest concentration of workers, there we also find higher average wages.

What if there were ever to be a massive migration of immigrants concentrated in one city in a short amount of time? Would there at least be some kind of a short-run downward pressure on wages? The Mariel Boatlift in October 1980 provided a natural experiment for such a research question, offering something of a labor market stress-test.

In 1990, leading labor economist David Card published one of the most cited papers in the economics of immigration to answer this very question. Ten thousand Cubans suddenly descended on Miami and were quickly given legal residency, growing Miami’s labor force by 7% in a matter of months. The data revealed no negative effect on the city’s wages or the unemployment rate.

The peer-reviewed literature since then has robustly confirmed the positive effect immigrants have had on the wages of native-born workers in the long-run. The seminal paper on this subject was first published in 2006 by Giovanni Peri. Applying data from 1990-2004 to a general equilibrium model, Peri showed the significant, positive effect immigrants have had in raising our wages.

All this evidence implies that the RAISE Act, a bill currently before Congress that would cut legal immigration in half, is misnamed. Immigrants’ presence here gives us a raise. If this bill passed, it would be a demotion – a demotion not just for America’s native-born workers, but a demotion of the very dynamism of America itself.