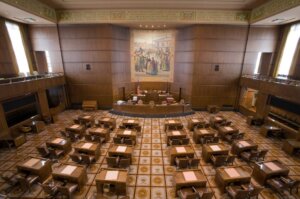 By Steve Buckstein and Kathryn Hickok

State economists have confirmed that individual Oregon income taxpayers will receive kicker refunds next year. Based on the May revenue forecast, more than $463 million will be returned to taxpayers as a credit on their 2018 tax bills, with the average refund being $227.

But with the news that the coming refunds will reduce our tax liabilities, some are criticizing the way the kicker law works, while others argue the money really belongs to the state, not the taxpayers. They argue that as long as any group of Oregonians—or any state government budget item—has a “need” for that money, then the money should go to them instead of back to the individuals who earned it.

Whether the kicker law is good or bad public policy doesn’t change the answer to a more fundamental question: Whose money is it? Is the kicker a rebate for overpaying your taxes or is it somehow the State of Oregon’s money, better left in government coffers? If we can find a better way to restrain runaway government spending, we should do so. But until that day arrives, Oregon’s kicker law is one defense against those who argue that some of the money you earned belongs to someone else just because they “need” it.