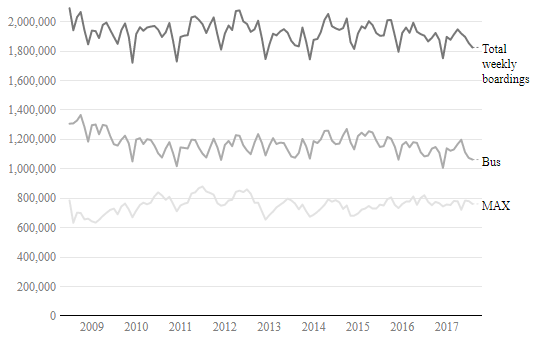 A strange contradiction in public policy reasoning was revealed yesterday by The Oregonian’s excellent transportation writer. Elliot Njus reports TriMet is mulling a $1.7 billion bond offering that will cost Portland metro area homeowners an average of $150 a year for the next 30 years.

The timing of this news comes with an ironic incongruity. TriMet has recently been introspectively seeking answers to a very important research question. Why has its ridership been flat while Portland’s population has been growing rapidly and why was there a significant decline in ridership over the past year?

Njus reported earlier this week that an emerging answer to this question, that TriMet seems to be convincing itself is a serious cause, is that rising housing prices in Portland have been contributing to the decline in its ridership. I’m not sure that’s a very astute observation. Housing prices are probably endogenous to rising incomes and economic growth. Public transportation is not a normal good. That is to say, as incomes rise, demand for public transportation declines.

But, unless this is mere public relations spin, TriMet actually believes higher housing prices have been putting downward pressure on its ridership. So days after arriving at this conclusion, TriMet’s new big idea is to impose higher costs on Portland-area homeowners?