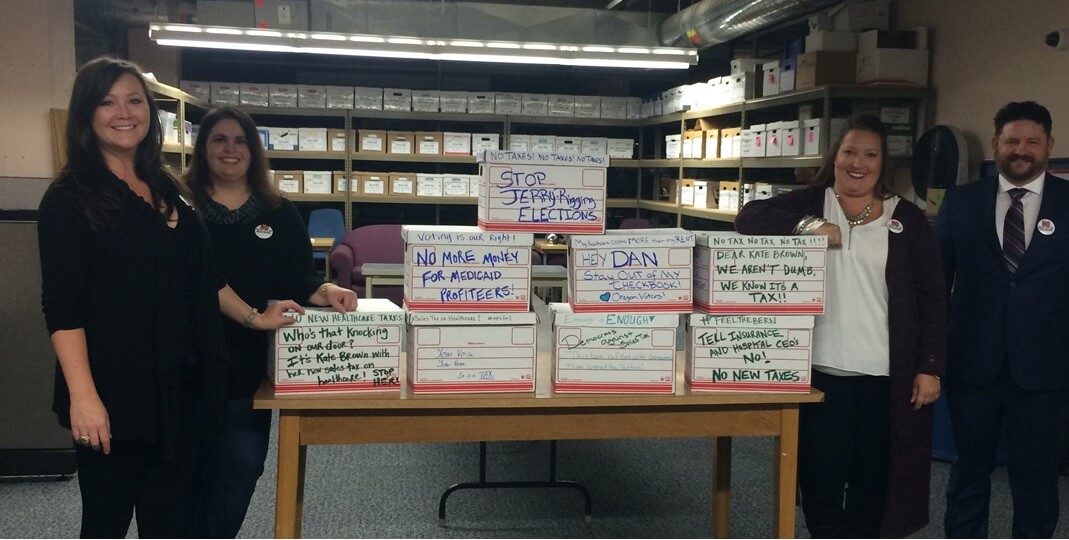 A big achievement in citizen power and direct democracy occurred today when the Stop Health Care Tax PAC turned in 84,367 signatures in a referendum petition to bring the $330 million health care tax to the voters.   The campaign (on a short time-clock) ran on a small budget but BIG on grassroots activism, word of mouth and a soulful desire to let voters have a say on the giant $330 million health care tax which was speedily passed by politicians early this year.  The three democracy musketeers and chief petitioners are State Representative Julie Parrish, State Representative Sal Esquivel and State Representative Cedric Hayden.  The Taxpayer Association of Oregon was honored to be a  coalition partner from day one and to help generate signatures across the state.

Many voters were shocked to learn about the tax.  Many had no idea their own health insurance would be hit.  This $330 million health care tax even taxed our hospitals.  It has still yet to be explained how raising taxes on both people’s health insurance and on hospitals will make health care more affordable.   This is exactly why many Oregonians signed the Health Care Tax Referendum repeal petition so they can have a public vote and decides for themselves the fate of this massive tax increase on their most vital family expense — a vote that was denied to them by the politicians who chose not to involve voters.

This petition effort is critical and we urge all Oregonians to follow them and support the coalition effort at Stop Health Cares Taxes.com