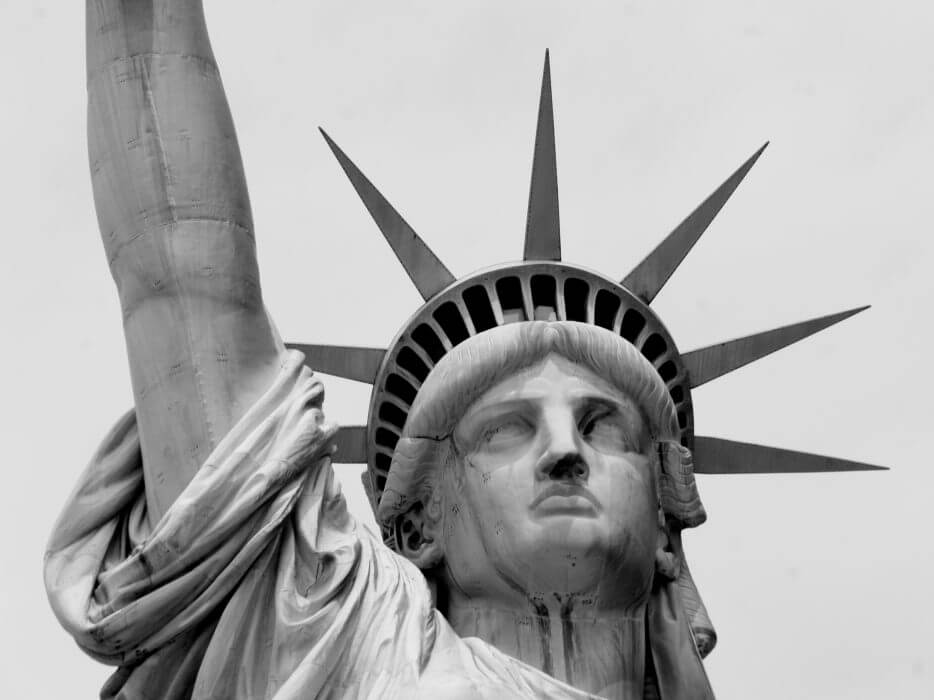 History relates many cases of incompatible combinations of interests, be they economic or ethnic or religious or linguistic, that precipitated serious civic strife and chaos inside some unlucky country.  Civic strife and chaos are never good things, one reason being (besides death and destruction) that you never know the outcomes.  For one awful outcome of civil strife, consider the French revolution of 1789 which, after the horrors of the guillotine, led to the Napoleonic wars whose combined estimates of the dead, military and civilian, run from 5 to 11 million.[1]  Or consider the Russian revolution of 1917, which started peacefully but later that year was taken over by the communists.  The takeover provoked a civil war between Lenin’s Red Army and other armies, which lasted 5 years and caused between 7 and 12 million dead, most of them civilians.[2]  To those numbers may be added another 20 million in Lenin and Stalin’s Soviet Union, from terror, forced labor and deliberate starvation, but that’s without counting the casualties in World War II.[3]  Our own worst case of civic strife that got out of hand, of course, was the Civil War, or the ‘War Between The States’, whose casualties of some 700,000 exceed those of any other war we fought; that number was especially appalling because it represented 2.26% of our then population of 31 million.  If that same war had been fought – God forbid – with our 2015 population of 320 million, there could have been 7 million dead!  For more recent dreadful examples, consider the ethnic/religious cleansings inside former Yugoslavia in the 1990s, a series of wars between tiny countries that killed 130,000 while creating millions of refugees, and the genocides in African countries, between ethnic groups that you and I would have trouble telling apart.

Closer to home, during most of the 1960s Canada was roiled by a separatist movement in the French-speaking province of Québec, by a Marxist-Leninist paramilitary group called Front de Libération du Québec (FLQ: ‘Quebec Liberation Front’).  It conducted over 160 violent incidents, killing eight people and injuring many more.[4]

I was also privileged – if that’s the word – to observe a similar language conflict in Belgium, just across the border from where I grew up, and between people whom the European ruling elites erroneously had deemed compatible.

After the allied powers’ final defeat of Napoleon, they wanted to create a northern buffer state against French aggression, because he had not been the first French warlord to ravage Europe.  They created this buffer state in 1815 by cobbling together the territories of the present-day Netherlands and present-day Belgium.  The Belgian territory combined French-speaking Walloons, in the southeast, with Dutch-speaking Flemings in the northwest, and King Willem I of the Netherlands, which borders Belgium in the north, would govern the united countries.  But the French-loving Walloons hated King Willem’s insistence on the teaching of Dutch, and both Walloons and Flemish had religious objections because they were Catholic while Willem made no bones about his anti-Catholicism.  In 1830 the Walloons started a revolt, there were some bloody battles, and the upshot was the formation of a new, highly centralized, independent country of Belgium.

In newly-created Belgium the Walloons dominated both government and business, the only officially recognized language was French, and they even prohibited the teaching of Dutch in the Flemish-speaking areas, in which a majority of the Belgian population lived.  This linguistic and cultural oppression continued for over a century.  During World War I, the Walloons’ refusal to use Dutch in the Belgian army led to Dutch-speaking soldiers being commanded by French-speaking officers, with predictable results.  The Flemings would not get an official Dutch version of the Belgian constitution until 1967.  But they got even, because during the 20th century the economy of Flanders grew while Wallonia’s aging coal mines and steel mills languished.  After many decades of bickering and riots, a federal system was formed in which Belgium is practically ungovernable, because each side enjoys blocking the other, and to this day many Flemings would just as soon have complete independence.[5] But unfortunately both groups seem to have been too busy quarrelling to notice that the country had become a destination for hostile Arabic migrants, so today Brussels, the capital, is 20% Muslim and has no-go zones where the police know they will be attacked.[6]  Did you know that the quip about falling from the frying pan into the fire was coined almost 2,000 years ago already, by the Roman Tertullian?

In the face of such results yielded by civil strife between incompatible groups, forcing a permanent open border policy on America looks like the height of irresponsibility, as does the insistence of the multiculturalists on government support for preserving the languages and ‘cultures’ of immigrants.  While immigrant enclaves where foreign languages are spoken have been seen before, in due course the melting pot took care of those, and those immigrants – Germans, Dutch, Scandinavians and other Europeans – were never hostile to their guest nation; they just wanted to live here and do well.  Besides, integration was a simple matter back then, without voting ballots in seventeen languages but with English taught in all public schools.  It’s true that for many immigrant children that meant total immersion, so for months they might not understand anything said in the classroom.  But the younger they were, the better they adapted; and those who favor government support for maintaining today’s immigrants’ native languages don’t know for what kinds of troubles they are sowing the seeds.  Once again we see well-meaning advocates blinded by an ideology, in this case multiculturalism which preaches that all peoples are equally competent and compatible and peaceful, and our highest obligation is to show sensitivity and understanding.  It never dawns on those ideologues that by and large, immigrants didn’t really like the cultures they came from, or they would not have come.

Advocates of open American borders should also consider the case of Japan, a country which proved that you can grow a world-class economy with hardly any immigration.  To Americans their reasons for restricting immigration may well look “racist”, but they spring from an appreciation of their ancient society’s customs and values, and a fear of the social disruptions that foreigners might bring.  This is why, until the US Navy’s Commodore Perry in 1853 forced the issue, Japan had purposely remained closed to the outside world.  The only exception had been the 2-acre island of Dejima in the Bay of Nagasaki, which the Dutch had been allowed to use as a trading post from 1641 until Perry’s breakthrough.[7]  Even though the Dutch traders on Dejima were confined to their small island (with Japanese sentries blocking access to the mainland), their ships brought a great deal of western science, which the Japanese eagerly embraced.  That science included the Dutch-invented microscope, clocks, pumps, the steam engine, along with books on medical expertise, naval technology, and much more, which the Japanese eagerly translated.  It’s quite possible that two centuries of importing Dutch scientific and technical expertise prior to Perry’s arrival were the reason for Japan’s amazingly rapid catching up with the advanced western powers, in a mere fifty years.[8] That was demonstrated by the Japanese navy’s destruction of the Russian fleet at the battle of Tsushima, in 1905.

But even after Perry’s opening of Japan antagonism to foreign influences persisted, with some Japanese scientists who had adopted western technology being murdered for their troubles.[9]  Today still, “The society retains a strong perception of ethnic and cultural homogeneity, and immigration remains resoundingly unpopular.”[10]  Even while faced with an aging and shrinking population, Japanese authorities remain hesitant to allow more immigration, and when they do, they go about it quietly so as not to alarm the native Japanese.  As a result, last year non-Japanese made up less than two percent of the population, and that two percent included hundreds of thousands who did not meet the American definition of immigrants because they were not ‘foreign-born’.  These people, known as Zainichi, had lived their entire lives in Japan.  Their ancestors had come from Taiwan, Korea or China when those lands were under Japanese rule, until the end of World War II, and you and I probably could not tell them from native Japanese.  But the Japanese can, and it is not illegal for them to discriminate against the Zainichi, as in housing.  Moreover in Japan nationality is by bloodline, not by place of birth as in America, and while naturalization is possible, it is rare.[11]

Historically the Japanese approach was not unique.  China had similar periods of deliberate isolation from the rest of the world.  And the European nations themselves, although many welcomed immigrants, have long opposed large-scale disruptions of their own societies by foreigners.  Throughout history they have fought invaders, usually for sensible reasons like an aversion to being robbed or enslaved or sacrificed to the invaders’ gods.

To cite one example, today’s Poles remember their great king Jan III Sobieski, who in 1683 beat back the invading armies of the Ottoman Turks at the gates of Vienna, after which they “ceased to be a menace to the Christian world.”[12]  Following their defeat the Turks were also pushed out of Hungary, which may explain why Hungarians share the Poles’ distaste for Muslim invasions.  Today the huffy indignation of west-European politicians at both countries’ unwillingness to open their borders to the middle easterners that the reckless chancellor Merkel allowed to invade Germany only shows their historical ignorance.  Can anybody imagine what today’s Europe would have been like if the Ottoman Turks had won at Vienna?

All the same, despite Jan Sobieski’s historical defeat of the Turks, I don’t want anyone to think that the Poles have always barred entry to all foreigners.  On the contrary, they encouraged them to come.  But they were selective – a bit like president Trump wants to be, with his RAISE Act.  During the middle ages, the largest concentration of Diaspora Jews in Europe developed in the Polish-Lithuanian empire, whose rulers had encouraged them to immigrate.  The Jewish colonies were granted considerable independence, and they grew and prospered – as in consequence Poland did.

Jews were not the only foreigners that formed colonies in eastern Europe.  Since 1000 AD or even earlier, Germanic people had also been migrating to Polish and Russian territories, forming self-ruling villages that had been given land by local rulers eager for economic development, since the migrants were much better than the local peasants at turning the primeval forests into productive farms.  The process of “Ostsiedlung” (Eastern Settlement), as the Germans called it, resembled the settlement of America’s interior, although the Germans went easier on the local Indians.  As in America the main incentive for Ostsiedlung had been free or cheap land, although religious freedom and exemption from military service had also been important, especially to pacifist German Mennonites.  When in the late 19th century the Russian Czar revoked their exemption, many of those Mennonites left for the US, Canada and Latin America.  But for many centuries prior one could find, throughout Russia, Ukraine and Poland, Yiddish speaking villages, German speaking villages, and Czech and Polish villages.  And yes, the rulers of those countries considered immigration a “good thing’ – as long as the right people came in.  The arrangement worked well, until ideologically obsessed 20th century dictators ruined it.

[5] “Belgium, like the EU, is a Frankenstein creation”, The Telegraph, 3 October 2007.  http://www.telegraph.co.uk/comment/personal-view/3643087/Belgium-like-the-EU-is-a-Frankenstein-creation.html