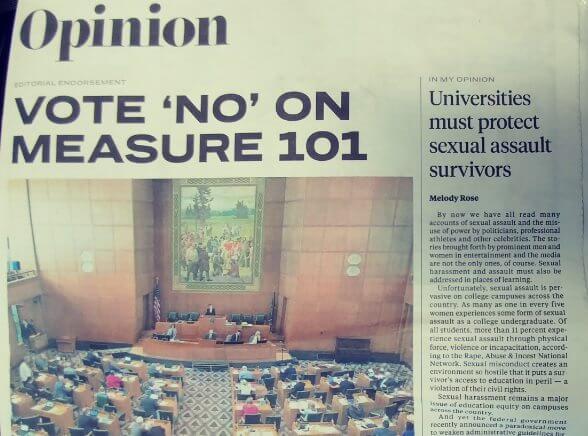 Measure 101 would raise taxes on Oregon hospitals and our hospitals are campaigning for it. That’s not exactly an example of altruism. The Federal distribution of Medicaid’s money is structured in a way that will generate new subsidies for hospitals from Measure 101’s spending, allowing hospitals to recoup their new tax liability with federal funds.

That’s not the only way Oregon hospitals stand to gain from fully financing the ACA’s Medicaid expansion. They will make more money from poor patients too, if someone else is picking up the bill. Medicaid’s reimbursement rates are certainly parsimonious, but they likely tend to be higher than the cost recovery of indigent care.

This is causing the hospitals’ political operatives to spread a well debunked canard, that the expansion of Medicaid saves money by reducing poor Oregonians’ unpaid trips to the emergency room. It’s all the more ironic that they’d get away with this false claim here in Oregon, because the solid economic research that demonstrated there are no such savings was conducted right here in the Beaver State.

Known as the Oregon Health Experiment, it’s one of the rare examples of a randomized control trial in social science. We can rarely conduct valid experiments on people in economics, but in 2008 a natural experiment emerged serendipitously. Well before the passage of Obamacare, with tax revenues up in 2007, Oregon Democrats in control of the state legislature felt there was enough money to slightly expand Medicaid on our own at the state-level, but we could only afford to provide free healthcare to a fraction of the number of people that would qualify. A lottery was chosen as a means of deciding which applicants were accepted into the program.

When  Katherine Baicker and Amy Finkelstein of Harvard University heard about this they jumped at the chance to follow the outcomes of the Oregonians that were selected in this lottery while also tracking a control group of Oregonians that were not. These leading researchers of healthcare economics found a clear result. People with Medicaid coverage utilize all forms of health services more than the control group did – including visits to the ER.

There was never any evidence to support the claim that expanding our Medicaid roles saves money by lowering the number of visits to the ER. The peer-reviewed literature shows the opposite is the case.

If one thinks it’s a legitimate role of government to provide free healthcare to people 38% above the poverty rate, then one needs to make a better argument than claiming it will save the public money. This Medicaid expansion will cost the state of Oregon more money, not less. Oregon hospitals have been lobbying for a faux tax on themselves to increase their sales at the public’s expense, not to reduce the need for their expensive ER staff.