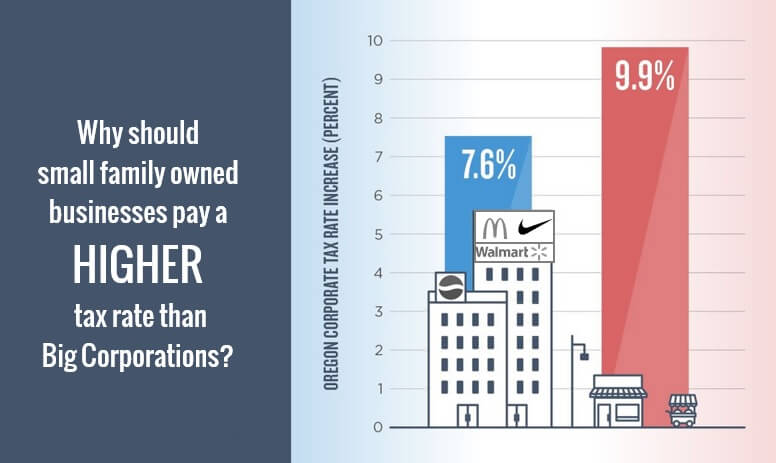 In 2013, as part of a “Grand Bargain,” the Oregon legislature passed a small business tax relief bill for pass-through entities—S-corporations, limited liability companies, and partnerships—with at least one employee who was not an owner. Business income for owners of these enterprises would be taxed at rates ranging from 7 percent for income below $250,000 and gradually topping out at 9.9 percent for income greater than $5 million.

This year the Oregon legislature is considering Senate Bill 1528. Among other things, the bill would disallow the 20 percent deduction provided in the federal tax law. This is known as a “disconnect,” meaning Oregon’s tax policies would be disconnected from federal law.
The state’s Legislative Revenue Office calculates that the disconnect under SB 1528 would increase state income taxes for Oregon small business owners by $180 million this year alone. By 2023, LRO predicts business owners would be paying $240 million more in state income taxes.

In addition, SB 1528 would limit the amount the amount of income qualifying for the Grand Bargain tax rates. According the most recent publicly available information, this amounts to a tax increase of more than $8,500 for the average affected business owner.
It would also disqualify business owners in certain industries from the tax relief. Consultants, architects, interior designers, computer programmers, home health care providers, lawyers, and doctors would all be disqualified from the lower tax rates if SB 1528 passes. Business owner in these industries would see tax increases of about $20 million a year, according to LRO.

The bill also extends the Grand Bargain tax rates to sole proprietors. LRO estimates that these business owners will save about $30 million in taxes. In testimony before the Senate Revenue Committee, however, invited representatives from the accounting profession called these estimates into question. The accountants testified that few sole proprietors would satisfy the requirement that the business have at least one employee who is not an owner.

In total, the state’s Legislative Revenue Office calculates that SB 1528 will increase business taxes by $212 million in 2018 and increase to $290 million in 2023. Because the tax increases apply only to S-corporations, limited liability companies, and partnerships, small businesses will bear most of the burden of the higher taxes.

[1] The provision provides a 20 percent deduction against qualified pass-through business income for those with incomes below $315,000 (joint filers). For filers above that threshold, the deduction is limited to the greater of (a) 50 percent of wage income or (b) 25 percent of wage income plus 2.5 percent of the cost of tangible depreciable property, and many service businesses are excluded. The benefit phases out between $315,000 and $415,000.