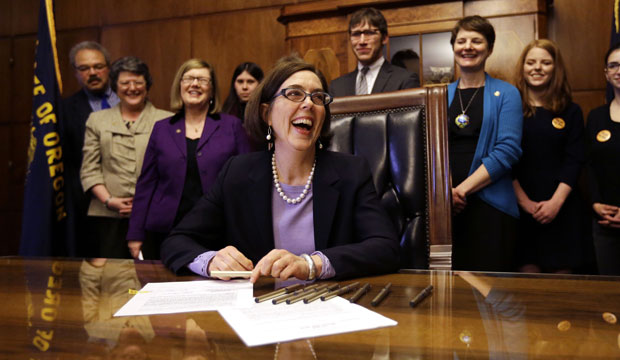 Oregon Democrat Governor Kate Brown is on the verge of betraying taxpayers yet again, with her far-left allies pressuring her to sign a massive $244 million tax hike on small businesses. Brown is already responsible for hundreds of millions of dollars in new taxes during her time in office, hiking taxes on healthcare, gasoline and even bicycles.

Oregon Public Broadcasting reports that the tax hike currently at Brown’s desk would directly hit small businesses in the state. “Many of her fellow Democrats and advocates for education and other public services are pushing her to sign the bill.”

Signing the bill could cause Kate Brown’s approval numbers to further plummet, as it would “force her to defend what is technically a tax hike during the fall campaign.” Brown’s approval rating has already dropped 13 points with reports of scandal and mismanagement in her administration.