Yesterday the CATO Institute released a study that further corrected a common methodological error popularly used by the anti-immigration Center for Immigration Studies. CIS likes to take data from the US Census Bureau’s Current Population Survey and analyze it at the household level. Since many immigrants marry low-income US citizens, and it’s possible to track welfare spending per person instead, this methodological choice seems like an intentional way of cooking the numbers. In the past, CATO has analyzed the same data set but used a more sound approach that excludes native born citizen members of each household. Such an approach finds immigrants take in less welfare spending per person.

Recently, anti-immigrant critics of America’s leading free-market think tank have suggested CATO ought to control for eligibility rather than income level. That’s exactly what CATO did in this latest research, which is granulated by whether or not a person qualifies for a program, and yields similar results. 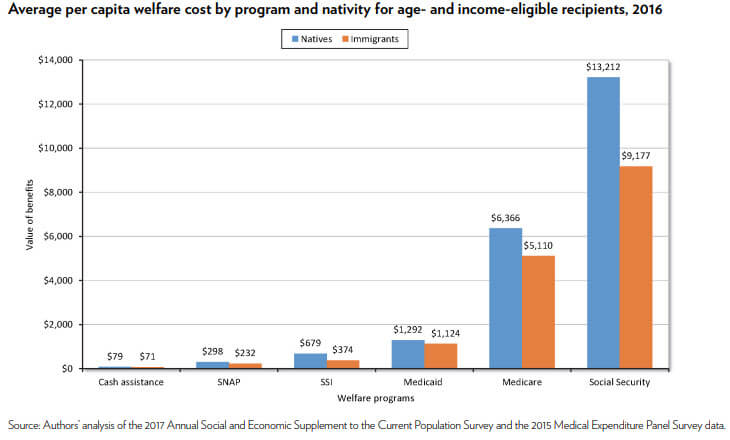 Those of us who were lucky enough to be born in the United States consume more welfare state expenditures per person than the immigrants among us do. Given that immigrants have a significantly higher labor force participation rate than native born Americans too, this makes our bounty of global migrants an insufficiently heralded blessing. America’s fiscal options would be much worse in their absence since reducing what little we do spend on them would also forgo the significant amount of GDP their labor produces. Thus the combination of these two facts calls into question a common argument made by those that try to reconcile the contradiction in their avowed recognition of the benefits of a free-market economy with calls for greater government regulation of our most precious economic input: our labor supply.