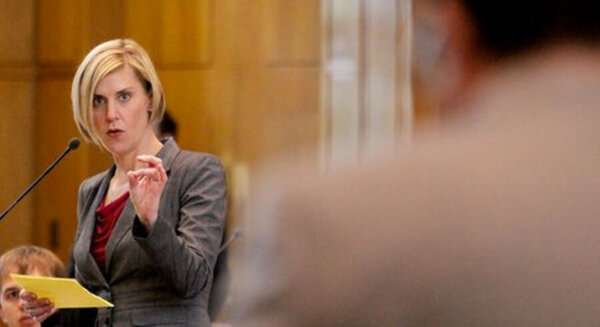 In a Facebook rant on 10/25, Williamson responded to a mail piece, which was not sent by the Pierce campaign, and used a quote from Williamson in the Portland Monthly where she described the importance of having women serve in the legislature.

Williamson accused Selma Pierce of misleading voters and “smearing” Representative Paul Evans, who she described as “one of the most decent and honorable members of the legislature”

There is a lot to unpack from Williamson’s rant. First, it exposes her desire for diversity in the legislature as solely virtue signaling. She only believes “Having women in politics, in leadership, and in the legislature creates a different and more collaborative environment.” when the woman is a vote for her agenda. However, when a Chinese, female doctor is running to hold office, Williamson is quick to attack her. Then fully endorse and donate over $100,000 to her straight, white, male opponent in order to keep a seat.

Williamson cares about keeping the seat enough to even refer to Evans as “one of the most decent and honorable members of the legislature”. Evans is the author of “Springtime in Babylon”, a book that glorifies necrophilia, sexual abuse, and homicidal rape of women. He is also the recipient of 111 fines from the Secretary of State’s office for election law violations. Yet Williamson is willing to dismiss Evans’ record against women and ethics laws if it means keeping his seat blue.

It shouldn’t be a surprise, given Williamson’s silence on reports of Representative Diego Hernandez having a list of the “hottest lobbyists” in the Capitol. The Majority Leader claims to be a supporter of women in politics, but is willing to cover up and turn a blind eye to her Democratic colleagues’ treatment of women as long as she keeps their votes.