The BEAR Report, which is being used to politically sell cap and trade in Oregon, made a serous rookie mistake in its analysis of our market for electricity. There are two products in the electricity market: energy and capacity. Energy is the price you are charged per kilowatt hour of use. Capacity is the price that must be paid to reserve a certain amount of use. A close reading of Berkeley Economic Advising and Research’s Oregon’s Cap-and-Trade Program (HB2020): An Economic Assessment reveals they only took one into consideration, energy.

That’s a common mistake to make, because most of us only buy electricity at the retail level. Retail customers do pay for capacity, but it only shows up in their monthly bill in the form of a higher price of energy. Industrial customers and utilities pay an energy price closer to the wholesale market, and they pay for capacity either with a direct price for reserving a specific amount of firm power, or in buying from the spot market, they accept the risk of a sudden spike in prices when supply falls short of demand.

That’s what we saw last week: the supply of electricity on our grid fell well short of demand. Look at the chart below. 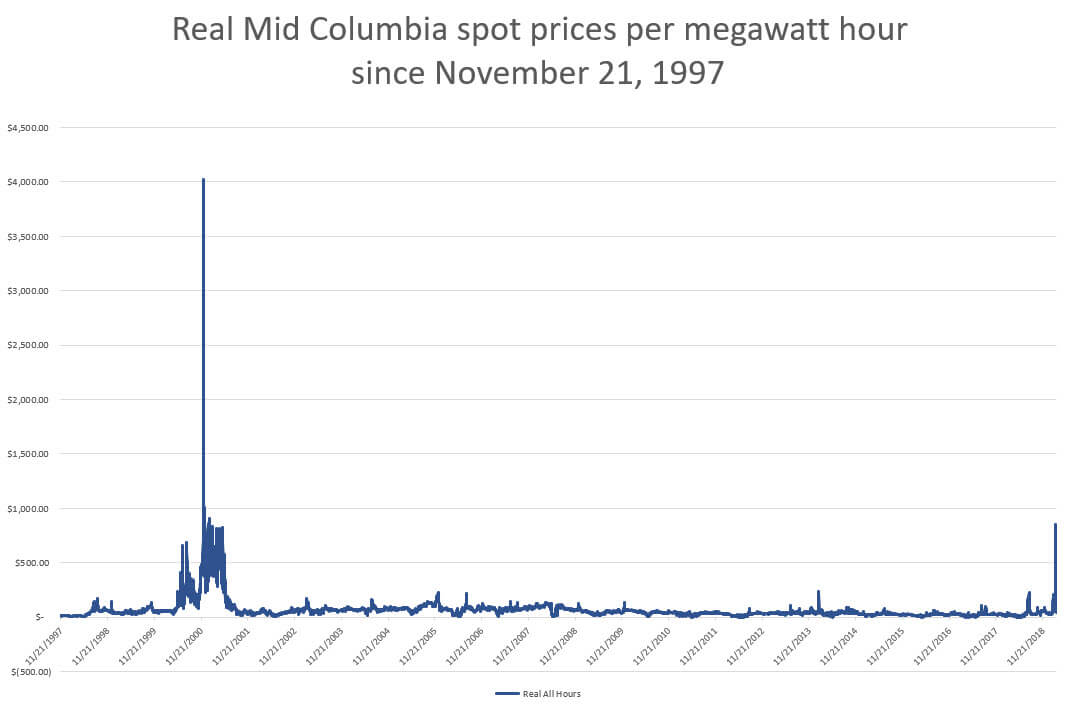 That’s the all-hour price of electricity (where peak and off-peak prices are blended together) for our grid, adjusted into 2018 dollars. Last week, on March 4, 2019 we suddenly saw prices unseen since the Enron era. Recall that in the summer of 2000, spot market prices spiked upward, peaking on December 12, 2000 in what would be more than $4,000 per MWh today (that big vertical line is actually just one day’s price), bankrupting utilities in California and shutting down paper mills and aluminum plants in the Pacific Northwest.

The wholesale price of electricity has been low and stable since Jeffrey Skilling was thrown in jail and utilities became better at integrated resource planning. So why do we now begin to see a scary reminder of the past?

I think we can rule out it being caused by Jeffery Skilling’s recent release from prison. There are three primary reasons for the sudden return of cascading wholesale electricity prices. First, it was very cold last week, as I’m sure you noticed. People were trying to stay warm, but we’ve had cold weeks like that nearly every year since President George W. Bush was making calls to “Kenny Boy.”

Second, our supply of natural gas has been curtailed since last October’s explosion in British Columbia. Enbridge’s pipeline to the U.S. Pacific Northwest, though back in operation, has only been at 85% capacity. Sumas, our natural gas market, spiked above $150 per MMBtu on March 4th. 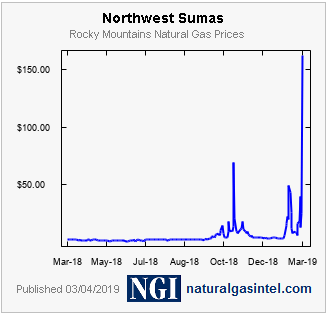 The price of natural gas has already been on the rise, but it was the third cause that served as the sufficient condition. These prior events simply made Oregon vulnerable to a third thing happening: the wind didn’t blow. Here is the Bonneville Power Administration’s generation portfolio last week: 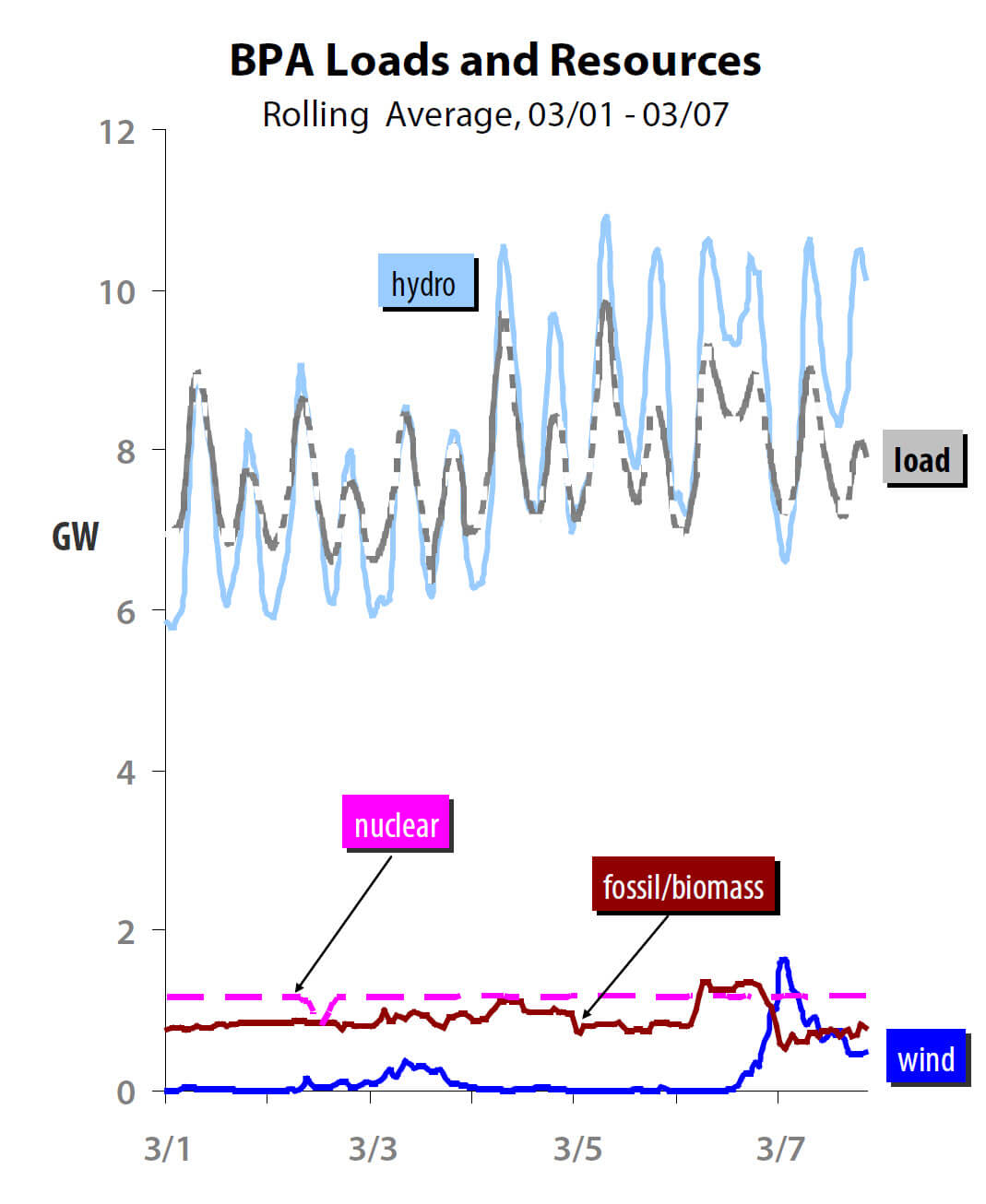 Regular readers of the Oregon Catalyst already know the price of wind and solar energy have dropped substantially, but when I wrote about this, I was careful to caution my readers that I was only talking about energy prices.

Wind and solar cannot guarantee capacity. They have to be backed up by another resource. The cheapest way to do that is with either hydroelectric dams or simple-cycle natural gas peaker plants. We won’t be building any more dams; so the more Oregon invests in wind and solar energy, the more dependent we will be on natural gas.

One purpose of HB 2020 is to limit the supply of natural gas to our grid to jack up its price. We got a taste of what that can mean for electricity prices last week. HB 2020 risks setting Oregon up for a dangerous return to an energy crisis that devastated the West Coast nineteen years ago.

The Governor’s Carbon Policy Office contracted with an economic consultant that didn’t know enough about electricity markets to realize that wind and solar are not substitutes for natural gas. They are complementary resources. BEAR’s model mistakenly treated them as substitutes, and this major calculation error caused the BEAR Report to significantly underestimate the economic cost of this bill.

The Oregon legislature should not vote on HB 2020 until we have a methodologically sound economic assessment. Before the die is cast for Oregon’s economic future, the Carbon Policy Office needs to either have BEAR fix this major error or contract with a new firm that doesn’t make those kinds of rookie mistakes.