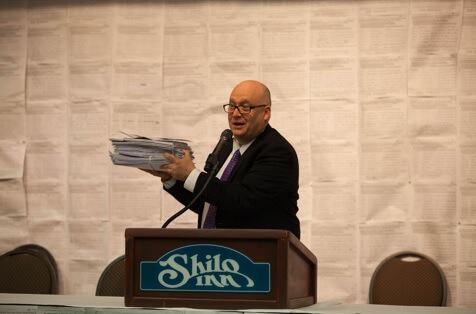 The Taxpayer Association of Oregon gathered 4,000 signatures in 40 days to protest the Governor’s beer, wine, cider, tobacco and vaping tax proposal and to protest any soda taxes that may advance in the 2019 Legislature.   The signatures sheets were displayed on a massive wall 16 foot wide wall at the April 4th Oregon Executive Club  event and also announced on the Lars Larson Radio show.

– If Oregon adopts a $1.50 tax increase, it could result in 39% of all tobacco sales being bought by black market entities and not licensed Oregon retailers.

– If Oregon adopts a large soda tax it could result in the loss of hundreds of jobs as was experienced by the Philadelphia experiment.

Here is the report study that was released on that event:

Oregon’s governor and legislature are considering nearly $450 million in new “sin taxes” this year. These include taxes on tobacco products, beer and wine, liquor, and liquor stores. Increased smuggling and other untaxed cross-border sales could be a significant unintended consequence. For example, one model estimates the increased tax on cigarettes could result in nearly 40 percent of cigarettes consumed in the state to come from such sales.

The Governor’s budget and HB 2270 would increase the cigarette tax by $2 a pack and extends the existing wholesale tax on other tobacco products to vaping products. The proposals would also increase other non-cigarette tobacco taxes. In the first full biennium the new taxes are in effect, the Oregon Health Authority estimates the taxes would raise almost $400 million a year.

Historically, taxes had the key purpose of raising revenues. The “best” taxes would be on goods with few substitutes (i.e., inelastic demand) and on goods deemed to be luxuries. In Wealth of Nations Adam Smith notes:

Sugar, rum, and tobacco are commodities which are nowhere necessaries of life, which are become objects of almost universal consumption, and which are therefore extremely proper subjects of taxation.

Over time, the rationale for these taxes has been repackaged into “sin taxes” designed to nudge consumers away from harmful or distasteful consumption. The Temperance movement in the U.S. argued for higher taxes to discourage alcohol consumption. Since the Surgeon General’s warning on the dangers of smoking, tobacco tax increases have been justified as a way to get smokers to quit.

Because demand curves slope down, “sin taxes” do change behavior by reducing the quantity demanded. However, for many products subject to such taxes, demand is not especially responsive. For example, The Economist reports a one percent increase in the price of tobacco is associated with a one-half of one percent decrease in sales.

Substitution and geography competition are other considerations for tax policy. An increase in the tax on spirits will result in an increase in beer and wine purchases. A spike in tobacco taxes in one state will result in a spike in sales in bordering states as well as increase illegal interstate sales or smuggling. The Economist notes:

After Berkeley introduced its tax, sales of sugary drinks rose by 6.9% in neighbouring cities. Denmark, which instituted a tax on fat-laden foods in 2011, ran into similar problems. The government got rid of the tax a year later when it discovered that many shoppers were buying butter in neighbouring Germany and Sweden.

This happens closer to home. Because Washington’s cigarette tax is currently much higher than Oregon’s, many Washington residents cross the state line to buy their cigarettes in Oregon. The State of Washington estimates more than one-third of the cigarettes consumed in the state were from illegally untaxed packs. Oregon retailers, and the people they employee, benefit from these sales. Oregon state government benefits, too: the state gets the tax revenues from out-of-state residents, but does not have to bear their healthcare costs.

In addition to losing taxed sales to Washington and California, the governor’s proposed cigarette tax increase will likely induce smuggled and other nontaxed cigarettes into Oregon. The Mackinac Center, a nonprofit nonpartisan think tank, estimates that currently less than 10 percent of the cigarettes consumed in Oregon are smuggled or other nontaxed sales. Mackinac projects the tax hike will send the smuggling rate to 39.5 percent.

If Oregon’s cigarette taxes reach “parity” with neighboring states, residents from Washington and California will have little or no incentive to buy cigarettes in Oregon. And, it’s not just the cigarette sales that are lost. Oregon will also lose sales the other products purchased at the same time, such as groceries and gasoline. Put in terms of trade: increasing the taxes in Oregon will reduce Oregon’s exports to other states.

A similar phenomenon happened when Washington privatized its liquor stores in 2012. Along with privatization came a steep increase in taxes on liquor, resulting in higher prices for consumers. Academic research found that the higher prices in Washington led to higher sales of liquor in neighboring Oregon and Idaho.

The effects of sales diverted to other states will ripple throughout the economy. For example, in 2016, Philadelphia imposed a soda tax that raised $137 million in less than two years. The Wall Street Journal reports the tax forced one supermarket to close and another to reduce its employment:

On Jan. 2, Brown’s Super Stores announced the closure of a ShopRite on Haverford Avenue. The supermarket is close to the city limit, and customers discovered they could avoid the soda tax by shopping outside Philly.

Sales at the Haverford ShopRite are down 23% since the tax took effect, CEO Jeff Brown says, and the once-profitable store began losing about $1 million a year. Mr. Brown owns 12 other supermarkets, including six in Philadelphia besides the Haverford store. Overall sales at the locations within Philadelphia are down by more than 15% since the soda tax took effect. Mr. Brown has shrunk his workforce by 200 by not filling jobs when they go empty, and the Haverford ShopRite closure will eliminate 111 more jobs through attrition.

Before policymakers fall for the story that higher “sin taxes” are a win-win for the state, they must carefully consider the competitive economy in which we operate. It may turn out that sky high sin taxes are not such a winning strategy.

— Help us fight tax increases like the poverty tax: Make a donation to the Taxpayer Association of Oregon.