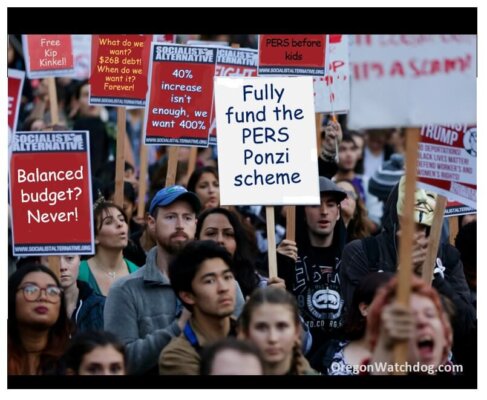 Yesterday thousands of Oregon teachers and students protested for more funding. Here is our honest take on what their signs should have been saying.

Sign #1. “Fully fund the PERS Ponzi scheme”
— Don’t take my word that our $26 billion Oregon government pension debt (PERS) is a Ponzi scheme. Katy Durant, chair of the Oregon Investment Council was quoted in The Oregonian as saying, “We should have been addressing this 20 years ago and it’s just been building. It’s a little bit like a Ponzi scheme. Sooner or later it’s going to catch up with you.”

Sign #3. “Balanced budget? Never!”
— Oregon is already the 4th fattest, biggest spending state government in America per-capita. If we can’t balance our budget by spending more than 47 states per-capita, then do you really think it will be enough when we hit #1? Our budget will never be balanced.

Sign #4. “What do we want? $26B debt! When do we want it? Forever!”
— Don’t forget our government retirement pension debt is $26 billion in debt.  As of today the Legislature has not passed a single bill to reduce a penny from the debt crisis.   This is how you drive a state into bankruptcy.

Sign #5. “Free Kip Kinkel”
— In order to fund the $26 billion PERS debt, the politicians have been letting dangerous criminals out early. They already cut sentencing as much as 20% for auto thieves, property crime and ID theft prisoners. Now the same lawmakers are trying to reduce sentencing for younger murders which would include Oregon’s most notorious killer Kip Kinkel.

— Thanks to social media it costs you nothing and it helps us reach over 40,000 Oregonians.  Please email this article, Tweet it, Link it, Facebook Like it and print it out.

— We’ve been fighting for you and lower taxes for 20 years. Please donate here.

The Taxpayer Association has been lobbying against billions of new tax increases at the State Capitol.  We also have been creating original content, cartoons and graphics like this one to help our message go viral on the internet. It works!  Over 22,000 people Facebook Liked our recent article.   Please support our efforts with a donation (there are tax credit and charitable dedication opportunities as well)