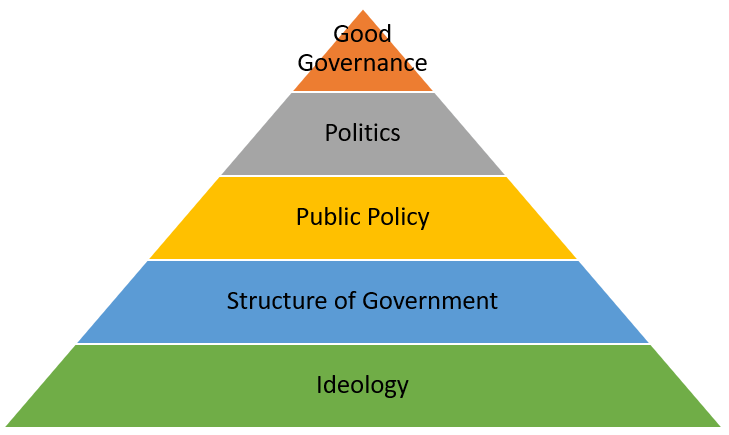 In 1943, Abraham Maslow published A Theory of Human Motivation in Psychological Review. He developed a hierarchy of needs where the higher pursuits of human existence like self-actualization and self-esteem were dependent on a lower order of needs like physiological and safety. Without the foundational base of needs met, such as food and water, the greater things in life are irrelevant. Similarly, good governance depends on a hierarchy of needs.

The entire edifice of good governance requires a stable foundation of ideology. Too often this gets underappreciated. When someone describes you as “ideological,” that is often intended as a pejorative term, but having a coherent set of governing principals is essential to any successful statesman or voter. It’s the rudderless elected official who lacks firm values and swing voters who lack a clue that we need to worry about, like that great line from the Hamilton musical: “If you stand for nothing Burr, what’ll you fall for?”

After a normative first principal about the purpose of government, the next critical foundation to good governance is the structure of government. This is a constitution, the process rules by which a government operates. Too often what people think should or should not be constitutional correlates to a short-term perspective of what they think should or should not be enacted into law when their people are in power, but questions about the structure of government are best answered from a long-term perspective. Imagine the restrictions on government power you’d prefer when the other side’s people hold the reigns of government. If power is concentrated too much or too little, then a polity can sustain neither good policy choices nor steady political decisionmaking.

A fair number of people get the distinction between policy and politics, but too few get the hierarchy right. Politicians should exist to enact good policy. So it’s important to know whether or not a policy is good or bad on its own merits instead of basing that judgment on who is trying to enact it.

Of the set of people that could be described as political junkies, the policy wonks, the people who actually take the time to understand the details of various governing choices, are too few. It’s remarkable the number of people who watch hours and hours of cable news but don’t know that supply curves are upward sloping. These are the kind of people that will cheer a candidate who promises to repeal Obamacare and cheer him again when he pledges to preserve protections for preexisting conditions, not knowing it was the Affordable Care Act that first forced health insurance companies to pay for preexisting conditions, and the rest of the bill was just a series of bandaids to mitigate the damage to health insurance markets when the government prevents insurance companies from being insurance companies. Voters, party activists, and politicians who are ignorant of policy are simply playing a sport, rooting for a team, and all the nihilistic connotation that implies.

Now that the legislature is no longer in session, I’m going to do a deep dive into the basic foundation of good governance: ideology. Each Friday morning I’ll be sending you a dose of political philosophy, trying to get Oregon Catalyst readers to think about the purpose of government and what its legitimate role in society actually is.

We live in a time of great political cultural change, but these ideas have been unchanged for centuries. When Fox News’s prime time commentator, Tucker Carlson, praises Elizabeth Warren’s economic plan, it’s a good time to go back to the basics.