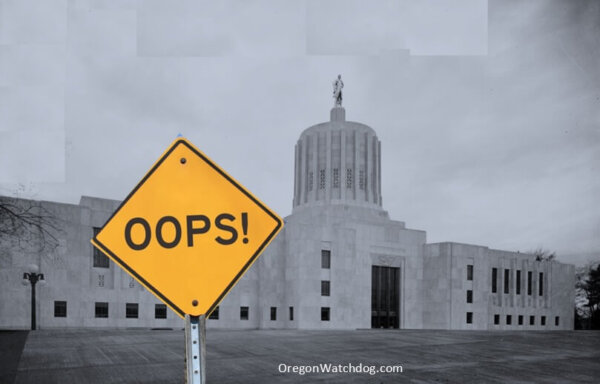 Oregon State Senator Floyd Prozanski announced that a grave mistake has been made.  The lawmakers accidently passed a crime bill (SB 1013) that gave death penalty relief to Oregon’s worst murderers on death row.  They promised it wouldn’t happen and it did.   Oregon prosecutors said it would happen when SB 1013 was being debated and they proved to be right.

Now Oregon State Senator Floyd Prozanski wants to call the entire Oregon Legislative delegation back into an emergency Legislative Session to fix their SB 1013 mistake (lest Oregon’s most dangerous criminals get a free pass on their voter-mandated execution).

#1. Oregon politicians do not know what they are voting for!

#2. The politicians even passed a bill (Sb 1005) previously to fix this mistake and it still didn’t work, making it doubly true that the politicians do not know what they are voting for.

#3. Oregon politicians are actively ignoring the credible voices (like the state’s top criminal prosecutors) of anyone who disagrees with them.

#4. Politicians are abusing the process by trying to rush bills through the late-in-session emergency process where public notice and input is severely limited.

#5. Politicians care more about helping criminals than they do about those being victimized by criminals as evidence by their three year voting history pattern of voting to reduce penalties and sentencing for murderers, auto thieves, property crimes and even ID thieves.

Senate Bill 1013 and Senate Bill 1005 are proof positive that our current leadership of Governor Brown, Peter Courtney and House Speaker Tina Kotek are a hazard to transparency, fairness and good governance.   Our democratic process is being abused and they only people benefiting in this particular botched death penalty example are Oregon’s worst criminals and murderers.