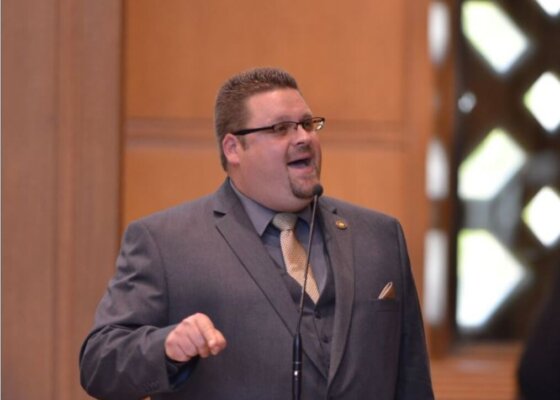 With 26 counties and counting opposing Cap & Trade, Representative David Brock Smith (R-Port Orford) speaks out on the lack of transparency, political maneuvering and absolute failure of the Governor and Democrats to conduct business for the people of Oregon and let the voices of the people of Oregon be heard through their vote on Cap & Trade, a program that would severely harm our working families.

“Having been in a lead role in Cap & Trade for many years, I have offered a number of thoughtful amendments that would also reduce emissions and sequester carbon while protecting the working families of Oregon,” said Rep. Brock Smith. “Unfortunately, the majority party has stepped away from our Oregon families to favor their special interest friends and financial contributors,” he said. Rep. Brock Smith introduced an amendment that was embraced by a bipartisan group of Ways & Means Legislative Members at yesterdays hearing on Cap & Trade. You can follow the link to the video by Clicking Here. You can view his Newsletter by Clicking Here. “As the Co-Vice Chair on the Joint Committee on Carbon Reduction through the 2019 Legislative Session, I was left out of any and all conversations in the crafting of the current Cap & Trade bills, SB 1530 & HB 4167.”

“As if the lack of transparency in their Cap & Trade scheme wasn’t enough, the majority dropped new bills in the House Committee on Rules that gives them even more unchecked power over the working families of this state.” said Rep. Brock Smith. One of these bills would allow the majority party to have complete control over writing the Ballot Titles and Explanatory Statements for measures sent to the voters. Another would give unelected bureaucrats the ability to further punish Oregon’s working families through rule.

“To further their agenda, deny the ability of working Oregonians the access to the legislative process and to silence opposition, the Speaker invoked her authority to waive posting requirements for Work Sessions on legislation,” said Rep. Brock Smith. “This is a travesty to the open and transparent government that Governor Brown pledged when taking office in the midst of another democrat scandal involving “green deal” ideas,” he said. “Oregonians deserve leadership that is for the people and by the people. The majority party has complete control over the process and they have failed to move budgets and other legislation to protect foster children and our vulnerable in this state for their environmental special interest folks. This is a complete failure to lead for all Oregonians, their families, communities and the businesses that support them.”

The Speaker of the Oregon House of Representatives released a statement yesterday on the departure of the Senate Republicans by stating, “Legislators shutting down the government by walking off the job is a crisis for our democracy. This is not a game. Voters elected us to do our job. The members who refuse to show up and do their jobs are saying to a large majority of Oregonians: your vote doesn’t matter.”

“I couldn’t agree more with the Speaker on these topics,” said Rep. Brock Smith. “As I said before, the majority party has failed to lead by passing budget fixes and other legislation to protect Oregonians and their families in this 35 day short session first, that is in itself is not only a crisis of our democracy but a lack of leadership for all Oregonians.” “This is not a game, these are the lives, incomes and communities of hardworking Oregonians that are at stake, and I stand doing my job with the overwhelming majority of them and our County Commissioners to oppose the oppressive overreach of the Governor and her legislators,” said Rep. Brock Smith. “Every Oregonian’s vote matters on issues, especially issues that will change the economic system of this state.” The base bill’s Oregon Climate Action Program’s Statement of Purpose (HB 2020) reads: To provide assistance to households, businesses and workers impacted by the transition in this state to an economic system that allows for the State of Oregon to achieve the greenhouse gas reduction goals set forth in ORS 468A.205.

“This irreversible change of our economy demands that the people of Oregon weigh in and have the right to vote,” he said. “Any argument to the contrary is not advocacy of democracy, but that of hypocrisy.”