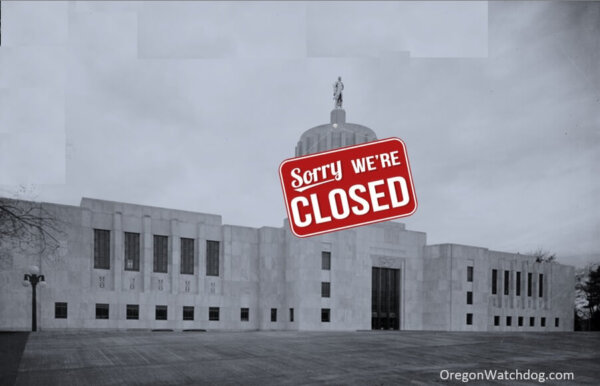 The Governor and Legislative leaders were publicly discussing holding an emergency meeting this week in the State Capitol, but the plans came to nothing in the end. Nothing.

The Senate President mentioned that some plan to wait until the May 20th to see how the economy is doing. May 20th?

Here we are at an unprecedented attack on our economy and the politicians are offering no solutions, no discussions, no debate, no help. We are dying out here.

Then again it is completely in character for the Governor. When it was discovered last fall that the Legislature “accidentally” passed a law setting 28 criminals off death row, Governor Brown refused to call them back into Session to fix the error that lawmakers admitted to and the media was pleading to remedy.

Some say the politicians cannot meet safely in the building. Yet, meeting is what the thousands of public employees are doing across the street of the State Capitol in the various state agency headquarters.

Here are some honest good intentioned suggestions:  The lawmakers could have shown up in masks and protective gear, had temperature readings at the door, and if they needed more social distancing room they could have met across the street at one of the many large Willamette University assembly halls. Or how about remote meetings using Zoom?  Arizona, Utah and Pennsylvania are working on remote sessions.  Alaska has been doing it for decades.  Congress has been meeting to pass the Stimulus.

Because the Governor has broad discretionary emergency power over state rules, you do not need to summon the entire Legislature or begin voting to have an impact.  Instead you could have a delegation of lawmakers meet to discuss ideas that the Governor can enact right now and discuss items to be discussed in a full Legislative Session in a few weeks down the road.  Starting the debate on what Oregon needs to do right now will help us act faster and smarter.

I understand the complications, but we are missing out on a chance to move the debate forward.

Unfortunately, there was no debate this week.  No ideas.  No solutions.  No discussion.

Now is the time to cut red tape and reduce regulations to help protect public health and help the economy rebound.

Yet, the Governor and the Majority Party leadership simply doesn’t care enough or have the functionality to move.