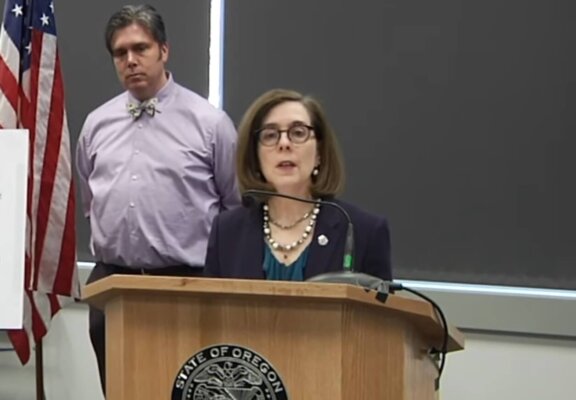 Oregon Governor Kate Brown held a rare press conference to announce her planned framework to re-open Oregon for business — but helping business was primarily MISSING from the agenda.

Instead the press conference was about health measures she will require to open the state again — which was a good thing in of itself. It included (1) lower infection cases (2) more PPE (3) more testing (4) improve contact tracing of infected people and (5) a better quarantine-isolation program.

The only business part of her short press conference was about getting health experts together with businesses to discuss health guidelines such as having more protective gear and more physical barriers like transparent shields.  Which is perfectly good and helpful.

Let me be clear. Getting Oregon back to work and rescuing small business from extinction will require more than just announcing new health rules they will have to live by (as necessary as that may be).

Knowing that small businesses will have less customers and more rules — what regulations is Oregon going to suspend longer-term to help businesses with the increased burden?  None were mentioned.  None will likely be mentioned.

There was no talk of a regional re-opening to take full advantage of the safer areas in Oregon. Right now, it looks as if Oregon’s plan is a one-size fits all plan.

There was no talk of an occupational re-opening which would allow safer industries to open earlier than more at-risk ones. Without a plan there won’t be one.

There was no talk of a safe-and-slow re-opening plan which would allow businesses to slowly increase their customers before a statewide clearance is given. For instance, could there be a point where a restaurant could begin allowing one to two families into their restaurants to gauge their re-opening abilities and challenges? Could a barber do home visits? We will never know if a safe-and-slow opening is possible (while meeting the blessings of health officials) until we have the public discussion, which Oregon is not having.

Oregon is not talking about answers or ideas but just about more rules.

Knowing that President Trump called a bipartisan panel of experts for his re-opening council, where is Governor Brown’s bipartisan pledge?

A bipartisan pledge matters more in Oregon because Governor Brown, like Governor Kitzhaber, has been a very reclusive partisan figure who doesn’t work with political minorities on the big issues. Kate Brown ramrodded the largest tax in Oregon history (with great confusion) through partisan means. Governor Kate Brown tried to pass one of the most restrictive Carbon Taxes in America through partisan means.  When it failed she ended up passing one of the most wide-sweeping Executive Orders in Oregon history (it effected 19 state agency departments) to force parts of the Carbon tax on Oregonians anyways.

Governor Brown has already been criticized by the media for being absent during this epidemic. Governor Brown already ignored a plan to meet with Legislative leaders in March. With our health and economy at stake, we plead with Governor Brown to change her ways to match the unprecedented moment we are living in. This is not personal nor political but a cry for help that the extreme danger our economy is in requires more engagement and leadership.

The only thing small businesses learned from the press conference was that the Governor has some new and large rules to meet before Oregon opens up.  The idea of ending the shutdown is now harder and longer away than before she gave the press conference. No help generally was offered to help small business survive after re-opening, which only darkens the picture for our economic future.